Outside the Beltway is featured, ironically enough, in a piece called “Beltway Bloggers” in today’s WaPo. 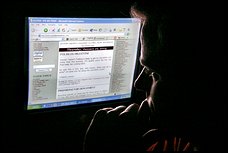 Web logs allow people with little technical know-how to create elaborate, quickly updated Internet sites at almost no expense. The growing ease of the technology has enticed hundreds (possibly thousands) of local residents to take their passions to the Web.

Blogging is a lifestyle, the most devoted say, and like the telephone or e-mail, can quickly become a second-nature method of communication.

One afternoon last week James Joyner trolled through the headlines on Google News, and learned that the Massachusetts Supreme Judicial Court ruled in favor of gay marriage. The Ashburn resident, who describes himself as a libertarian-leaning conservative, clicked through to the USA Today story on the ruling and decided to add it to his blog, Outside the Beltway.

A quick right-click of his mouse brings up a box giving Joyner, who uses a software system called Moveable Type, the option to link the story to his blog. He writes a couple of paragraphs of commentary and hits the “publish” button, sending an update to his blog. The whole process is done in about 10 minutes. There are options to change the way the text appears and some blogs are fancier than others, but very little technical prowess is actually required, he said.

Within hours Joyner received more than a dozen e-mails notifying him that readers had commented on that post. The replies go up on the site automatically, but Joyner can read the text in his e-mail and if there is a tawdry remark, he has the power to remove it. His site gets between 1,000 and 1,500 hits a day, mostly from people Joyner has never met.

“You get interaction going, discussions. People can get sort of heated and start calling each other names,” said Joyner, 38, a former political science professor.

Joyner will sometimes post to his blog 25 times a day and regularly reads between 30 and 40 other blogs. The activity takes up to an hour or two of his time on weekdays, and while he says most of it is done at home, Joyner admits that he probably blogs more than he should from the office.

Joyner says he’d be reading the news anyway, and reasons that blogging is actually complementary to his job as a nonfiction editor for Brassey’s Inc., a Dulles book publisher. “I’m trying to sign authors for books. Part of my job is finding out what the hot topics are,” he explained.

Why spend so much time on what Joyner contends is “just a hobby?” It is simply a way to connect, many bloggers say, and can create a sense of community.