Congress is getting complaints that calling the Osama raid "Geronimo" is offensive to Indians. 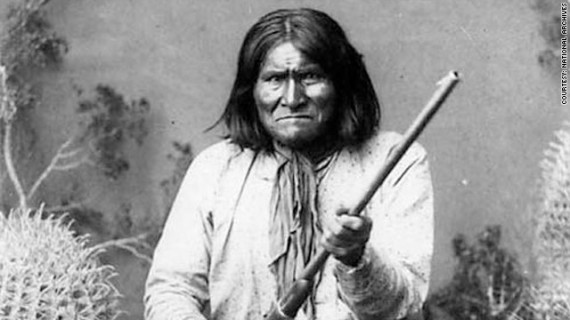 Some Members of Congress are apparently concerned about the raid that killed Osama bin Laden been “offensive.” Not because he was apparently unarmed. No, because the SEALs who shot him used the code name “Geronimo.”

ABC (Congress to Examine “Inappropriate” and “Devastating” Use of “Geronimo” Codename in bin Laden Mission):

The Senate Indian Affairs committee will hold a hearing Thursday on racist Native American stereotypes, a hearing that will now also address the Osama bin Laden mission and the code-name Geronimo.

While the hearing was scheduled before the mission, a committee aide today said the linking of the name Geronimo with the world’s most wanted man is “inappropriate” and can have a “devastating” impact on kids.

“The hearing was scheduled well before the Osama bin Laden operation became news, but the concerns over the linking of the name of Geronimo, one of the greatest Native American heroes, with the most hated enemies of the United States is an example of the kinds of issues we intended to address at Thursday’s hearing,” Loretta Tuell, the committee’s chief counsel, said in a statement.

“These inappropriate uses of Native American icons and cultures are prevalent throughout our society, and the impacts to Native and non-Native children are devastating,” Tuell said. “We intend to open the forum to talk about them.”

The Obama administration has indicated that the Navy SEALs who killed bin Laden did not use “Geronimo” as the codename for him, but rather it was the code for the act of capturing or killing him.

While wildly overblown, I can understand why some would be offended at having their heritage expropriated as a mascot for sports teams. This is especially true when it’s done cartoonishly, as in Chief Wahoo, or blasphemously, as in the use of tribal chants as a means of exhorting the team on to victory. But, seriously, someone is upset that an operation to go after the most straightforward villain since, oh, Adolf Hitler is associated with an Apache leader? Hell, most of the Army’s helicopters are named after American Indians or American Indian tribes–including the Black Hawk helos that were used in the raid.

But, apparently, the reaction was immediate. Ben Carnes, a prominent Chocktaw activist, explains:

As a Native man, I was genuinely stunned to learn the US had selected the name of a hero who fought to defend his people and way of life.  We’ve been reduced to caricatures as mascots and entertainment in sports and media. Our Identity as Native people has been confiscated and labeled as “Native Americans’ or “American Indians”. Then to associate one of our icons of resistance is an insult. I can’t even begin to imagine the horror felt by Geronimo’s descendants or his people, the Chiricahua Apache. They were branded as Americans in 1924 before they were pardoned as prisoners of war, ironically.

This society tends to marginalize the First Peoples of this land, so maybe this shouldn’t be a surprise that the hero’s of Native people are still regarded as terrorists by the military and they saw no problem in making the association to Geronimo. Some people may say that OBL’s skill at evading capture was a tribute in memory of Geronimo! Let’s do a reality check here, who would want to elevate OBL to a glorified level?

Carnes, who observes “I felt a more appropriate name would have been Custer or Columbus, both murderers,” was under the misapprehension that Geronimo was used as a code name for bin Laden himself, not the mission to kill or capture him. Surely, that makes a difference?

But his larger post shows the difficulty here: He finds even “Native Americans” and “American Indians” offensive, preferring instead the tribal names. While not unreasonable, it goes against speech patterns that have existed since time immemorial. Indeed, both “Native Americans” and “American Indians” were invented in fairly recent times to be non-offensive. But, for some at least, the very notion that all indigenous tribes should be lumped together is offensive.

Interestingly, military operational codenames shouldn’t have this issue at all, since the standard practice for decades has been to choose two words from a randomized list. This is mostly designed for operational security, lest a clever nickname give clues to the operation’s thrust.