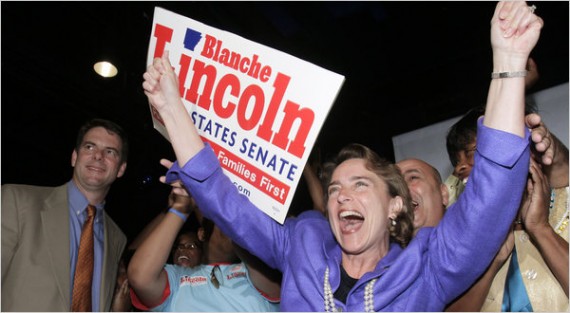 On a primary election night when the heralded anti-incumbency sentiment was expected to again demonstrate its strength, Senator Blanche Lincoln proved there were clear limits to its power.

Virtually written off as a likely victim of voter outrage at veteran politicians, Mrs. Lincoln, a two-term Arkansas Democrat, showed that an experienced office-holder with money, message and determination still had a chance to prevail even in a toxic environment.

But while Mrs. Lincoln survived to fight on in the general election, incumbents in both parties could not take much solace from the outcome in Arkansas. In South Carolina, Representative Bob Inglis, a veteran Republican, was forced into a runoff election after finishing a distant second in the battle to hold on to his seat. And Gov. Jim Gibbons, Republican of Nevada, lost his primary. Mr. Inglis has broken with his party on occasion, and his status provided more evidence that the anger against incumbents applied to both parties heading into November. Should he lose in the June 22 contest, he would be the third House incumbent to fall this year; two of those would be Republicans.

“Both parties are having civil wars with their Washington establishments,” said Joe Trippi, a Democratic strategist. “You are seeing it on the Republican side; you’re seeing it on the Democratic side. The reality is, regardless of what party you are in, if you’re an incumbent and it looks like the Washington establishment is backing you, you’re in trouble. It’s the wrong place to be this year.”

Mrs. Lincoln looked as if she could become the third Senate incumbent to be defeated this year, following Senator Robert Bennett, Republican of Utah, and Senator Arlen Specter, Democrat of Pennsylvania. She had been unable to finish off Lt. Gov. Bill Halter in the initial primary last month. Labor unions, environmental groups and liberal activists, unhappy with her opposition to a public health insurance option and her other moderate stances, were eager to make an example of her, pouring millions into attack advertisements.

Mrs. Lincoln had made some missteps in her bid for a third term, notably allowing herself to be painted as the deciding vote in the contentious health care debate, fueling intense criticism and news coverage of her at home. She was also saddled with ties to President Obama in a state where he fared poorly in 2008.  But Mrs. Lincoln, recently named chairwoman of the Agriculture Committee, fought back, arguing that outside interest groups were trying to take control of the election away from Arkansas voters. And she was helped by former President Bill Clinton, who campaigned at her side as she emphasized her efforts to find solutions in partisan Washington.

But I think Marc Ambinder (“The Meaning Of Arkansas, Regardless Of The Winner“) is closer to the truth:  It was a narrow contest with its own local idiosyncrasies.

It’s a funny habit we political pundits have. If, say, 3000 votes separate a winner from a loser, we forget that a small shift in some part of a state could have swung those votes the other way, and we tend to massively over-interpret the meaning of the tiniest of margins. So let’s say that the results in Arkansas were flipped — that Lincoln won by a point, the interpretation ought to be nearly the same, logically.

He makes a series of observations about the particulars of the race, notably that “Bill Clinton is Kingfish” and that the closing efforts of the campaigns, notably the get-out-the-vote efforts, matter a lot.  I’d add:  Especially in primary run-offs, where a tiny handful of votes here and there make a huge difference.