Brazil has overtaken the UK as the world’s sixth largest economy, an economic research group has said.

Brazil’s economy grew by 7.5% last year, but the government has cut its growth forecast for 2011 to 3.5% after the economy ground to a halt in the third quarter, with analysts blaming the country’s high interest rates and the worsening situation in the eurozone.

On the one hand, this is part of the ongoing shift in relative economic power in the world and the specific rise of the BRIC countries (Brazil, Russia, China, and India).

Having said that, the growth in question for Brazil is quite impressive, especially to anyone who has been paying attention to Brazil’s long-term economic path.

The piece also has the following rankings and projections, which underscores the rise of the BRIC countries: 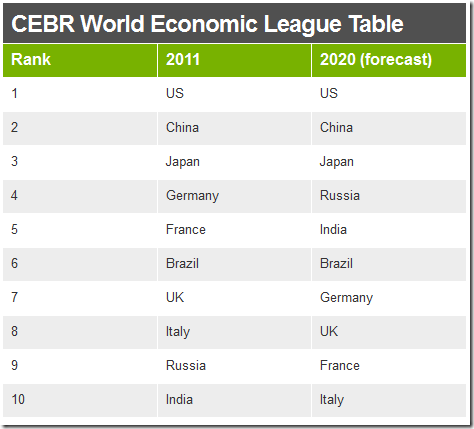 Some Basics on China