Update (1635): The online reports are coming in now, although they’re rather sketchy:

A militant group in Iraq has executed one of the Bulgarian hostages it is holding, Al-Jazeera television reported Tuesday. The terrorists set a 24-hour deadline to kill the second Bulgarian they are holding hostage, Al-Jazeera reported. There was no immediate U.S. confirmation of the report. FOXNews.com will bring more information as it becomes available.

They have a tiny photo of the man, whose name isn’t mentioned.

A militant group led by suspected al Qaeda ally Abu Musab al-Zarqawi killed a Bulgarian hostage and vowed to execute a second Bulgarian it was holding within 24 hours, Al Jazeera television said on Tuesday. The Qatar-based channel said the group had issued a video tape of the execution but did not broadcast it.

If al-Zarqawi is involved and there’s a video, it’s almost certainly a beheading.

A bit of background in this story from a Bulgarian source: 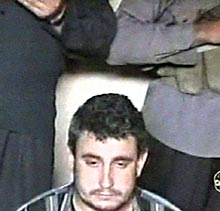 One of the abducted Bulgarian drivers in Iraq is begging for help, officials said Friday.

Experts at the Bulgarian Foreign Ministry analyzed the video that showed the two hostages. It was aired by al-Jazeera, and showed the handcuffed men with three militants standing behind them. Voices couldn’t be heard, but analysts managed to read the lips of one captive.

The militants threatened to kill them, unless the US frees all Iraqi detainees in 24 hours. The deadline expires at midnight.

Bulgaria confirmed on Tuesday that militants had killed one of two Bulgarian truck drivers held hostage in Iraq, despite huge diplomatic efforts to rescue them. “I can confirm that one of the Bulgarians has been executed,” said government spokesman Dimitar Tsonev. “It has been an unequal struggle. We have made a huge effort in the past few days.”

We also have at least one significant news organization confirming the suspicion that the man was beheaded:

A MILITANT holding two Bulgarian truck drivers has executed one of them and is planning to kill the other within 24 hours. Arab cable television station Al-Jazeera reported today that Jordanian militant Abu Musab al-Zarqawi’s Tawhid and Jihad group had beheaded one of the men after threatening last week to kill both if the US did not release all Iraqi detainees by Saturday.

Update (7/14 20:20): After some reports that both hostages might still be alive, we have further confirmation that it is not so.

Government officials expressed outrage over the execution of a Bulgarian truck driver in Iraq and urged militants to release their second hostage. Despite the slaying, they said Bulgaria remained committed to helping rebuild the turmoil-wracked country. “We will do our best to save the life of the other Bulgarian hostage, and we appeal to the kidnappers to release him,” said a joint statement from President Georgi Parvanov, Prime Minister Simeon Saxcoburggotski and parliament speaker Ognyan Gerdzhikov. “Bulgaria should continue to assist Iraq’s reconstruction, stabilisation and democratic development.”

The two hostages, Georgi Lazov, 30, and Ivaylo Kepov, 32, were kidnapped June 29 as they were driving trucks loaded with used cars to be sold in Iraq to the northern city of Mosul.

Police discovered a decapitated body in an orange jumpsuit and a head in a bag on the banks of the Tigris River, authorities said today, leading to fears a second Bulgarian hostage had been killed.