The short-lived national unity spawned by the attacks of a decade ago was re-kindled for a few hours as former presidents Bill Clinton and George W. Bush joined with Vice President Joe Biden to honor Flight 93. 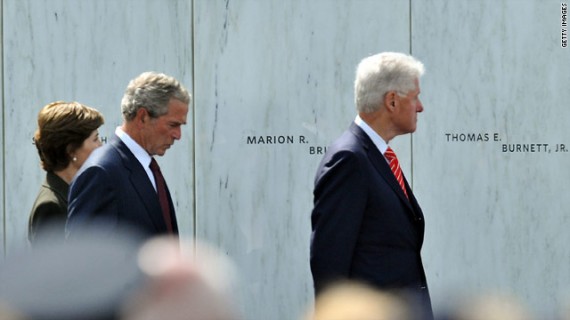 The short-lived national unity spawned by the attacks of a decade ago was re-kindled for a few hours as former presidents Bill Clinton and George W. Bush joined with Vice President Joe Biden to honor Flight 93.

Former Presidents George W. Bush and Bill Clinton spoke solemnly Saturday at the unveiling of the memorial for victims of United Airlines Flight 93.

“With their brave decision, they launched the first counteroffensive in the war on terror,” said Bush, who appeared emotional as he spoke near Shanksville, Pennsylvania, to families and friends of those who died in the crash.

All 40 passengers and crew members were killed after confronting hijackers aboard the Boeing 757 on the morning of September 11, 2001. The hijacked plane, widely believed to be targeting the White House or the U.S. Capitol, crashed in a field outside Shanksville. Recounting heroic details on the flight just moments before it ended, Bush said, “What happened above this Pennsylvania field ranks among the most courageous acts of American history.”

Bush, who served as commander in chief when the United States went to war in Iraq and Afghanistan, said 9/11 proved that conditions in other countries could have an impact in American streets. “It may be tempting to think it doesn’t matter what happens to a villager in Afghanistan or a child in Africa, but the temptation of isolation is deadly wrong,” Bush said.

He also told stories of unity in the days that followed the September 11 attacks and spoke to the intense political debates that have shaped Washington over much of the past decade. “But Americans have never been defined by our disagreements,” Bush said. “Whatever challenges we face in the future … we must never allow our differences to harden into divisions.”

After ending his speech, Bush quickly walked back to his chair and sat down, while the audience gave him a standing ovation.

Clinton, vividly emotional, then walked to the podium to begin his speech but struggled to get through his first few sentences. “Before President Bush came up to speak, I asked him if he was having a hard time, and he said, ‘I was doing fine until I looked at all of you’,” Clinton said, pointing to the audience.

The Hill (“Bush, Clinton honor the heroes of Flight 93 at memorial’s dedication“):

Clinton, saying the he was “aghast” to find out that $10 million more was needed to finish the memorial, will set up a fundraising drive.

“Speaker Boehner and I have already volunteered to do a bipartisan event in Washington,” Clinton said. “Let’s get the show on the road.”

The event largely stressed the heroism and sense of unity sparked by 9/11, and Clinton praised both of his Oval Office successors and the Congress. “I think we should also thank President Bush and those who served with him, Vice President Biden and President Obama, those who served with them, for keeping us from being attacked again,” Clinton said. “Speaker Boehner, I thank you and the members of the Congress who are here and who have been in the Congress for the last 10 years, trying to respond to the findings of the 9/11 Commission and improve our ability to secure our homeland.”

Vice President Biden paid tribute Saturday to the passengers and crew of United Airlines Flight 93, which crashed in Shanksville, Pa., on September 11, 2001.

“We’re here today to remember and honor 40 men and women who gave their lives so others could live theirs,” Biden said, “decent, honorable women and men who never imagined 10 years ago tomorrow that when they said goodbye to their children, when they kissed their loved ones goodbye and walked through that door, that they were doing it for the very last time.”

Biden said that by fighting back against those who hijacked their flight the passengers and crew of Flight 93 were acting as “citizen patriots.”

“They join an incredibly elite list of women and men, and a long history filled with ordinary Americans doing extraordinary things,” he said, “men and women of undaunted courage, uncommon resolve, and a stubborn perseverance in the face of unfathomable challenge.”

Video of President Clinton’s speech isn’t (yet) available as a separate clip at C-SPAN. You can see it at the CNN link or watch video of the whole ceremony: