A bunch of people talking on cellphones during a plane flight would annoy the heck out of me, but the government shouldn't be involved in deciding if it should be allowed. 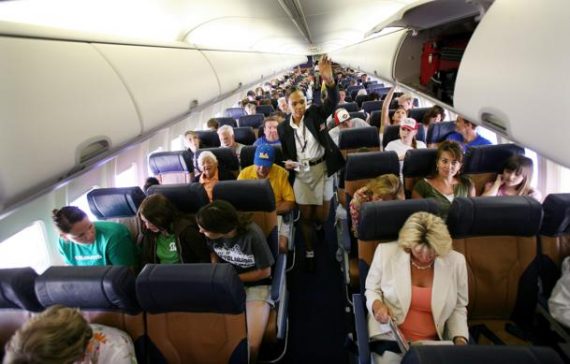 Just about a month ago, the Federal Communications Commission announced that it was considering reviewing the current regulatory ban that prevents passenger airlines from allowing their customers to make and receive cell phone calls on airline flights. At the time, the story generated much criticism online and on cable news, much of it quite negative commentary, citing the annoyances that a cabin full of people potentially talking on their phones from coast to coast would create. Additionally, the union representing Flight Attendants chimed in against the proposal with the argument that allowing passengers to make calls would somehow interfere with flight safety. Yours truly also posted about the matter, mostly negatively in the manner that others were on the day that the story broke. While the FCC has apparently not taken any action on the issue as of yet, that hasn’t stopped legislators from chiming in on the matter:

Fourteen members of Congress added their voices this week to those who oppose a Federal Communications Commission (FCC) decision that opened the door to cell phone conversations on planes during flights. In a letter to Federal Aviation Administration chief Michael Huerta, the bipartisan group encouraged him to maintain the ban. Most major airlines say they won’t allow the use even if the government permits it, and flight attendants and pilots also have spoken out against the phone conversations.

Here’s what the 14 members of the House had to say in their letter to Huerta:

“We share the concerns of the flying public and the many professionals in the aviation industry that such a change to the current rules disallowing the use of cell phone voice networks could result in not only a markedly less pleasant flying experience, but a less safe one as well. Allowing passengers to make phone calls while in flight would disrupt the right of consumers to enjoy the quiet comfort of their flight. In addition, we have strong concerns about the effect such a change may have on safety. Simply put, the flying experience in the United States would be forever changed for the worse if voice calls are allowed on flights. We hope that you will consider our concerns and those of the industry’s experienced professionals as you consider how to proceed.”

The list of Members of Congress who signed on to this letter were seemingly equally balanced between Republicans and Democrats. At the same time, though, the move to enshrine the regulation that the FCC is considering changing is being led by Republicans in the House and Senate:

Political momentum to keep a ban on cellphone calls during flights gained momentum Monday as lawmakers said it would be crazy to allow them.

“Let’s face it, airplane cabins are by nature noisy, crowded, and confined,” said Shuster, the chairman of the House Transportation and Infrastructure Committee. “For those few hours in the air with 150 other people, it’s just common sense that we all keep our personal lives to ourselves and stay off the phone.”

The bills follow a flood of complaints to the Federal Communications Commission, which announced last month that it would look into ending the ban.

For years, the use of many electronic devices on flights has been banned for fear they could interfere with navigation systems. But the FAA earlier this year loosened rules and said passengers would be allowed to send texts and emails from their phones during flights.

Now the FCC is looking into whether the ban on the use of cellphones is needed for safety reasons.

“For passengers, being able to use their phones and tablets to get online or send text messages is a useful in-flight option,” Shuster said. “But if passengers are going to be forced to listen to the gossip in the aisle seat, it’s going to make for a very long flight.”

Shuster and Alexander, who both face primary challenges in 2014, say they are responding to popular opinion.

“Imagine two million passengers, hurtling through space, trapped in 17-inch-wide seats, yapping their innermost thoughts,” Alexander said last week in a statement. “The Transportation Security Administration would have to hire three times as many air marshals to deal with the fistfights.”

“Stop and think about what we hear now in airport lobbies from those who wander around shouting personal details into a microphone: babbling about last night’s love life, bathroom plans, next week’s schedule, orders to an assistant, arguments with spouses,” Alexander said.

This report led Kevin Drum to scratch his head over the why Republican who are normally anti-regulation would be pro-regulation in this case:

So what’s next? A federal ban on cell phones in buses? Restaurants? Movie theaters? Cell phone yakkers are pretty annoying in those places, too.

Don’t get me wrong: If I were your benevolent overlord, I’d ban them in all these places. In fact, that would just be the start. And punishment for violating my benevolent statutes would be harsh. Very, very harsh.

But even as a meddling, big-government-loving, knee-jerk liberal, I’m having a hard time coming up with a good reason for this. If Delta Airlines wants to allow cell phone use even though half their customer base rebels, why shouldn’t they? The safety arguments are pretty specious, and in any case, Shuster doesn’t even try to go there. He just wants to prohibit private companies from allowing behavior that he finds annoying.

National Journal’s Elahe Izadi comes at this from a similar perspective:

Shuster doesn’t view his proposal as unnecessary government regulation. “We are eliminating the ban on people being able to text and email, so what I say is, tap, don’t talk,” he said. “This is about social discourse in our skies today. They’re in confined places, crowded … I think it’s unnecessary to add this.”

What’s got everyone so worried about this anyway? Well, the Federal Communications Commission is considering lifting its ban on cell-phone calls while flying, a ruling that would only deal with the technological question of whether it’s safe for such calls to be made in the air. The Transportation Department has begun a comment period as the agency examines whether to ban in-flight calls to protect travelers’ rights and safety. The Federal Aviation Administration has already issued new guidelines on allowing use of electronic devices—though not phone calls—during takeoffs and landings.

House leadership is “happy to” work with Shuster on the bill, according to an aide, and Shuster says he may get a floor vote in the New Year on his proposal. He also says he has popular opinion behind him. In a recent Associated Press-GfK poll, 48 percent of respondents said they were totally opposed to allowing passengers to make calls on commercial flights; 19 percent were in favor and 30 percent said they neither favored nor opposed it. (The overall error margin was plus or minus 3.5 percentage points.)

Libertarian-leaning Reason commissioned its own poll, conducted by Princeton Survey Research Associates International, showing 45 percent of Americans favor allowing calls during flights, with 50 percent opposed. (The margin of error was plus or minus 3.7 points.) The site writes that other polls “do not make it clear whether Americans want the government to ban their fellow passengers from talking on cell phones during commercial flights, or if they think that decision should be left to the individual airlines.”

As I’ve already noted, when I wrote about this issue in November, I came down fairly hard against the idea of allowing people to talk on cellphones during an airplane flight regardless if it was an hour long or six hour long. As I sit here today, I still tend to think that if I ended up on a flight sitting next to, in front of, or behind someone who spent the entire flight talking loudly on their phone, I very likely would be annoyed in the extreme. Thinking the matter over more completely, though, I have to say that any implication I made in that article that this is something that the government ought to consider banning was wrong on my part. Instead of making it a matter of government regulation or legislation, this ought to be a matter that individual airlines are able to make based on their evaluation of what their customers would prefer. Based on the polling that has come out on this issue over the past month, it’s quite likely that many airlines would decide to opt out of making cellphone conversations possible on their planes, or they may decide only to make it available on a portion of their fleet. Additionally, since installing the equipment that would make this possible wou ld be an additional expense for the airline, they could decide to charge those people who wish to access the network a per minute fee that would likely eliminate the kind of frivolous phone calls that are likely to annoy people the most. There are likely other options as well, including basing ticket prices on whether the flight you want includes the ability to make phone calls or not.  Finally, if it does become a reality that the ability to make and receive calls in flight interferes with the comity in the cabin then it would be relatively simple for the flight crew to be given the option of turning off the equipment that makes it possible to make calls. In other words, the answer to the “problem” of in flight phone calls isn’t government regulation but to let the market decide.

There is one exception to these comments that would probably be wise, and that comes into play if there is valid scientific evidence that the equipment that would allow phone conversations in flight would somehow interfere with the safe operation of the airline. Generally, that is an issue that the Federal Aviation Administration would be charge with examining regardless no what the FCC might have to say on the issue. I don’t have the technical expertise to comment on that aspect of the issue, but it strikes me that the fact that the FAA has already determined that using a wide variety of electronic devices, including smartphones over a plane’s WiFi network if one is available, do not interfere with the operation of airliners, it seems unlikely that the ability to make or receive calls would be any more dangerous. Additionally, the fact that in-flight calling from equipment installed by airlines themselves, which traditionally operates by accessing a satellite based network, has been common for some time suggests that there shouldn’t be any negative impact on a plane’s operation from using cellphones to do pretty much the same thing.

One final thing to note is that the actions in Congress are, obviously, blatantly political. Both Shuster and Alexander are up for re-election this year, and even if this legislation goes nowhere this will be something they can show to their constituents to claim that they are “doing something.” The fact that it’s something that they should not be doing at all seems to have failed to occur to them.