George W. Bush's new memoir reveals that he briefly considered replaced Dick Cheney as Vice-President before the 2004 elections. His decision not to do so reveals much about the relationship between Presidents and Vice-Presidents in modern American politics. 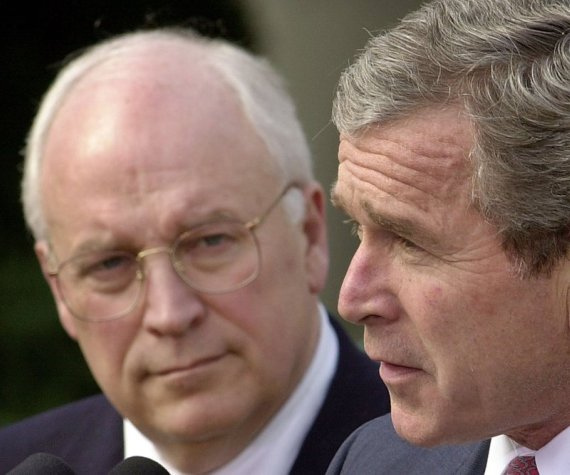 Former president George W. Bush once considered replacing his vice president, Richard B. Cheney, Bush says in a revealing memoir in which he offers advice on the U.S. economy and admits mistakes on Iraq and Hurricane Katrina.

Bush’s book, “Decision Points,” is full of anecdotes and behind-the-scenes details of eight eventful years that began with the attacks of Sept. 11, 2001, and ended with an economic meltdown in which “I felt like the captain of a sinking ship.”

He writes of many errors involving the Iraq campaign and the failure to find weapons of mass destruction there, despite numerous intelligence reports pointing to their existence.

“No one was more shocked or angry than I was when we didn’t find the weapons. I had a sickening feeling every time I thought about it. I still do,” Bush writes.

The book includes the revelation that the controversial Cheney had volunteered to step down in 2003 so Bush could pick someone else as his running mate for his 2004 reelection campaign.

Bush writes that he considered the offer, adding that although Cheney “helped with important parts of our base, he had become a lightning rod for criticism from the media and the left.”

Although Bush did not like Cheney’s image as described by critics, accepting his resignation offer would help “demonstrate that I was in charge,” he writes.

Bush said he talked to aides about asking Republican Sen. Bill Frist to run with him instead of Cheney, but ultimately stuck with Cheney because he valued his steady hand.

The idea that Bush should replace Cheney as his running mate prior to the 2004 elections was something that pundits on both sides of the aisle were talking about in the run-up to the 2004 elections, as Bruce Bartlett noted in an article in National Review in July, 2004:

John Kerry made headlines with the surprise pick of John Edwards as his running mate. At least for the time being, he has helped energize his campaign. This may increase the pressure on George W. Bush to replace Dick Cheney as vice president. By the time the Republican convention meets in New York, Bush may need to do something dramatic to narrow the lead Kerry is likely to be enjoying after the Democratic convention.

Personally, I like Cheney. But there is no question that he is a polarizing figure. A recent NBC News/Wall Street Journal poll found that 17 percent of Americans have a very positive view of him, but 27 percent have a very negative view. His overall job-approval rating consistently runs about 10 percentage points below Bush’s.

One is starting to hear more and more Republicans hint that Bush ought to rethink his decision to run again with Cheney. “A number of well-known party members continue to talk privately about the possibility that Cheney will be replaced before the party’s convention,” the Washington Post reported on last week.

On June 20, avowed Cheney admirer James P. Gannon wrote an open letter in USA Today urging him to step aside for the good of the party. Gannon noted that fairly or unfairly, Cheney’s strong support for the war and ties to Halliburton and the oil industry have made him a lightening rod for Bush’s critics. Said Gannon, “You must ask yourself now if your continued presence … will offer strength or weakness to the Republican ticket in November, and what it will mean for GOP prospects in the future.”

Gannon went on to note that there is precedence for presidents to change vice presidents even in wartime. Abraham Lincoln replaced Hannibal Hamlin with Andrew Johnson in 1864, and Franklin D. Roosevelt dumped Henry Wallace for Harry Truman in 1944. (Thank God!) Furthermore, Cheney’s well-known health problems preclude his being a candidate for president in 2008. “Inaugurating a vice president next January who could step up to lead the party in 2008 would be a great asset for the GOP,” Gannon added.

I made the same argument in the Los Angeles Times on June 6. I suggested that Bush had missed an opportunity to anoint his own successor, someone who would give the Republicans a fighting chance against what likely will be a very strong Democratic ticket probably headed by Hillary Clinton should Kerry lose. Bush could have chosen someone who might otherwise not be a viable candidate due to a lack of electoral experience.

Of course, in the end Cheney didn’t really harm Bush in the 2004 elections, and the idea that an anointed Bush successor like Frist or Condoleeza Rice (another name mentioned in 2004 as a possible running mate) would have had much more luck in 2008 than John McCain did is unsupported. So, the arguments of those making the “Dump Cheney” argument in 2004 have pretty much been proven to be wrong.

That should stand as a lesson to those who would give the same advice to President Obama. Already, there are those suggesting that Joe Biden should step aside prior to the 2012 elections to allow the President to select a running mate who would be ready to run in 2016. The most common name mentioned, of course, is Hillary Clinton despite the fact that she has emphatically denied any interest in that happening, and despite the fact that she is only five years younger than Biden, who most suggest would be too old to run for the Presidency in 2016.

As the Bush/Cheney experience shows us, though, President’s select Vice-Presidents for reasons other than creating a successor that will follow in their electoral footsteps. In both Bush and Obama’s case, the selection of running mates was obviously influenced by the desire to have a name on the ticket with more experience, especially in the foreign policy area. That need would continue into a second term, of course, by which time a President and Vice-President will have developed a close working relationship that it would arguably be unwise to disrupt. So, just as Bush decided that keeping Cheney on the ticket was worth whatever electoral risks he was taking, Barack Obama is likely to decide that, despite his now famous gaffes, Joe Biden does more good than harm.