Breaking news out of Los Angeles as there are reports of multiple shots fired, and multiple injuries, inside a terminal at Los Angeles International Airport:

LOS ANGELES — A shooting at Los Angeles International Airport led to the evacuation of at least one terminal on Friday, the authorities said. Flights have been grounded and passengers have not been allowed to get off airplanes that have landed, the airport said.

While little information was immediately available about the incident, which airport officials say happened around 9:30 a.m., television images showed at least one person being wheeled from a stretcher into a waiting ambulance. The Los Angeles Fire Department said it had transported multiple people to hospitals, but provided no other details.

Passengers were seen milling outside of both Terminals 2 and 3 at the airport.

Reports on cable news outlets state that a suspect has been shot and is in custody, or that at least that the LAPD believes the incident to be over. Other reports are saying that the initial target for the shooting was a TSA Agent at one of the terminal checkpoints and that this agent may have been injured or killed. However, as we’ve found in some many of these cases before, these initial reports are often incomplete or incorrect.

Authorities are supposed to be speaking to the press within the hour, so possible we’ll learn more then.

Update: NBC News is reporting that one TSA Agent has been killed, and others are wounded:

A gunman opened fire Friday inside a terminal at Los Angeles International Airport, killing one Transportation Security Administration worker, wounding as many as three others and sending terrified travelers diving for cover and fleeing onto the tarmac, authorities and witnesses said.

The gunman was in custody, multiple sources told NBC News.

The shooting started at about 9:20 a.m. local time at Terminal 3. The gunman pulled an assault rifle from a bag and shot his way through security, said Patrick Gannon, chief of the airport police. He went past security into the gate area, where he was taken into custody after exchanging fire with law enforcement, Gannon said.

Travelers who were waiting to snake through the security line suddenly had to abandon their suitcases and hit the ground, witnesses said. The shooting brought one of the nation’s busiest airports to a standstill.

Federal officials, citing initial information, told NBC News that the suspect was a U.S. citizen in his early 20s.

UCLA Medical Center said it had one patient in critical condition and two in fair condition. One of the TSA workers was shot in the leg, said Nico Melendez, a spokesman for the Transportation Security Administration.

“We were just standing there in line and somebody started shooting,” said Nick Pugh, a witness, who told NBC Los Angeles that he heard eight to 10 shots. “Everyone dropped to the floor and started crawling along the ground.”

Update # 2: The shooting suspect has been identified:

They say he has a family address in New Jersey. Officials also say he spent some time in the Los Angeles area. A preliminary review of the terror data bases and watch lists find no connections to Ciancia. And he does not have any significant police record.

Also, sources say, despite some reports to the contrary, the suspect is still alive.

The union representing the Transportation Security Administration (TSA) says the male officer who was killed was a Behavior Detection Officer (BDO) who was the travel document checker at the checkpoint area, had recently transferred to LAX from Montana, and had no prior interaction with the shooter.

Gannon said the gunman was taken into custody following an officer-involved shooting.

Officials say it is a “static situation.”

CNN is reporting that law enforcement is executing search warrants in both Los Angeles and in New Jersey, reportedly in Pennsville a town in Southwestern New Jersey along the Delaware River where this person may have family ties. 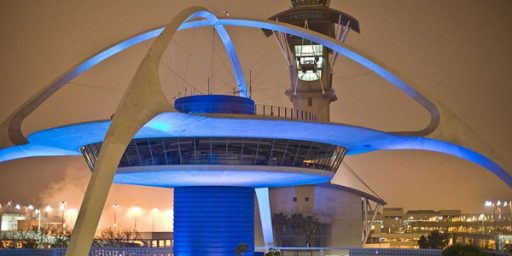