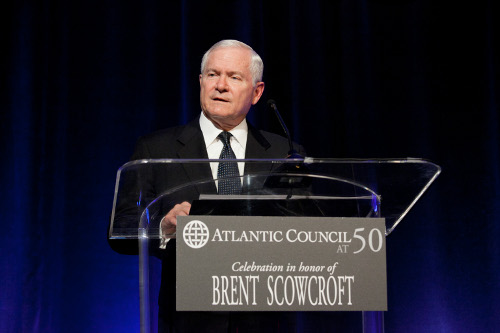 Last night, the Atlantic Council honored Brent Scowcroft, National Security Advisor to Presidents Gerald Ford and George H.W. Bush.  A common theme of the evening was the paralysis of American politics, which in turn imperils US leadership in the world.

Speaking at a gala dinner honoring the great soldier, scholar, and statesman as part of the Atlantic Council’s year-long launch of the Brent Scowcroft Center on International Security, Gates declared that he was “deeply concerned with the decline in view and values associated with Brent Scowcroft when it comes to how we govern and relate to one another,” lamenting that “civility, mutual respect, putting country before self and country before party” were “increasingly quaint” and becoming “historic relics.”

For a variety of reasons, including gerrymandered Congressional districts which promote ideological politicians and a “24/7 digital media environment” that advantages “the most extreme and vitriolic views,” Gates believes that American politics has become so polarized as to put our system in danger. We’ve seen a “coarsening and dumbing down” of our national dialogue. As a consequence, Gates argues, compromise has became a dirty word. The “moderate center” which historically governed American foreign policy “is not holding.” And a series of “wave elections” makes it virtually impossible to “sustain strategies beyond one presidency and one Congress.”

Brzezinski was the most blunt, declaring “We have this strange situation in which the party in power is kind of almost frozen in the face of this complexity and the party out of power is raving mad.” There’s plenty of blame to go around, Jimmy Carter’s top advisor declared. “The American public is abysmally ignorant about the world” and “we don’t have a mass media that provides a significant degree of pertinent information about the world.”

Mostly, though, he blamed our political leaders, observing that George H.W. Bush was the last president to truly understand how to lead the world, charging that all subsequent presidents–including his own party’s Bill Clinton and Barack Obama–have been “inward looking” and lacking a grand strategy. Additionally, the political climate and the need to pander to a simplistic electorate leads to “demagoguery” which in turn “imperils intelligent decision-making.”

Kissinger agreed, observing that “there are too many tactical issues for any National Security Advisor to solve.” The truly effective ones keep their focus on the strategic level issues, which Kissinger allowed is incredibly difficult given “the philosophical and cultural problem as a society of immediacy.”

Jones served the sitting president and was naturally far more cautious. But he allowed that the media and political climate forces politicians to focus on the minute-by-minute fight over issues, which “makes strategic thinking next to impossible.”

Additionally, Jones warned that “We must get our own economic house in order.” He lamented that “Decline comes when a nation is not doing the things it knows it must do.” He cited America’s decades-long refusal to come up with a sustainable energy problem, despite repeated system shocks.

Scowcroft concurred but noted with characteristic understatement, “The world is not going to call a recess” while America sorts out its own problems.

The transcript and audio of Gates’ speech can be accessed at the link. Video will be up later today.