The Eagle Has Landed Edition OTB Caption ContestTM is now over. 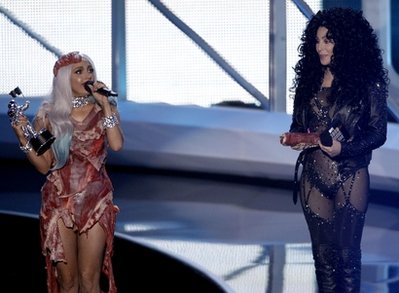 The Eagle Has Landed Edition OTB Caption ContestTM is now over.

First: Robert W. Armijo – “Later, Lady Gaga was almost cooked to death at a celebrity roast held in her honor.”

Second: FormerHostage – Jerky: before and after.

Third(tie): Michael Hamm – Guess where I am marinating the sausage.

Doug Mataconis – Cher: I don’t care how much they pay me, there’s no way I’m re-enacting that Madonna kiss thing while she’s wearing that dress.

Lady Gaga: “…but why an astronaut standing on the moon?”
Cher: “’cause the moon is made of American sleaze.”

The Monday Contest is already in the Land of the Pharoahs.