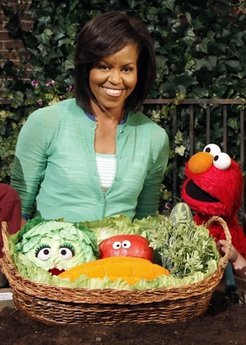 Maggie Mama – Elmo was distraught when he learned FLOTUS planned to serve up his friends as part of the President’s arugula salad.

Michael Hamm – Michelle advises Elmo that he can eat her patch, and the vegetables too.

G.A.Phillips – Tossing salad with the Tickle Me Elmoarator?

I just don’t carrot all.

The Thursday Contest has already been on a thrill ride.