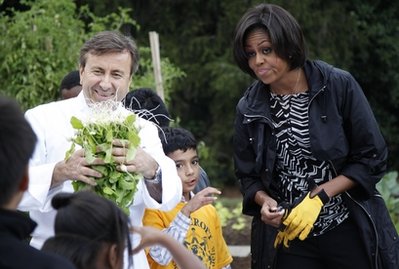 Second: Mr. Prosser – No, kid it’s not, Where do you think you are, California?

Maggie Mama – After a reporter asked the First Lady if she would be gardening again next year, Michelle gave him a look which could kill.

“Charletans. what is your Occupation?” “ARU ARU ARUgula”

DRUDGEBREAKING: an unnamed source today voiced concern that undocumented Kenyan workers had been aiding in the Whitehouse garden harvest… developing…

“This would be a great place to build a Rabbat.”

The Thursday Contest is already on the ropes.

Bradley Manning Acquitted Of ‘Aiding The Enemy,’ Could Still Face Up To 136 Years In Prison