The The Farce Is Strong With This One Edition OTB Caption ContestTM is now over.

The The Farce Is Strong With This One Edition OTB Caption ContestTM is now over. 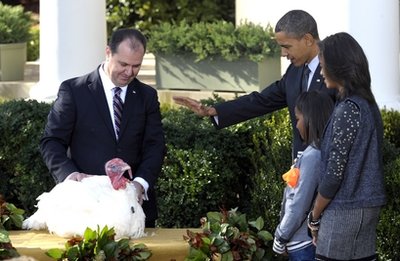 Steven L. Taylor – “Like my predecessors, I lack the will to stop this silly ritual.”

Mr. Prosser – Let’s see, pardon for this guy or DeLay, hmmm. OK, this guy. Send DeLay Conyer’s copy of Playboy and a carton of smokes; tell him, “good luck.”

Squirrely wrath – “Okay, Turkey, I’m pardoning you, but only if you register as a Democrat.”

Steve – Christine O’Donnell makes it to the White House after all.

Maggie Mama – Wow, there are more turkeys here than back on the farm

JKB – First the TSA, now this guy…Why can’t my species fly! On the upside, no helicopters like in Cincinnati back in ’78

Obama: “At God is my witness I thought turkeys could fly.”
Turkey: “Ditto.”

“The Turkey’s name is Muhammad, Of course, I’ll pardon it.”

The Monday Contest is already staring at ewe.