The Cackle of Clerics Edition OTB Caption ContestTM is now over. 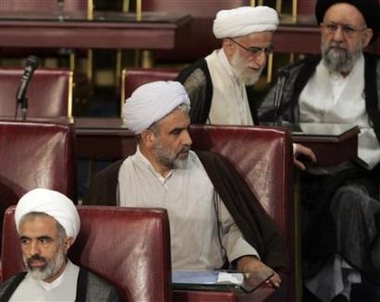 Second: Michael – If this infidel behind me kicks my chair one more time…

Third: yetanotherjohn – The democrats in congress heeded the latest Al Qaeda tape and converted to Islam.

McCain – Who’s bringing the frankincense and where the hell is the myrrh?

N.B. Goldstein – “Hey! Pssst! For the last time, Ahmed – Sharia Law says NO farting in parliament. Save it for honoring your wife’s cooking. Wait a minute – you’re not Ahmed! You in the black turban – you’re the American infidel, Gene Hackman!”

FormerHostage – Black Turban thought bubble: “Dang! That’s the problem with an aisle seat. Someone’s always going out for falafel in the middle of the movie!”

“Sit down, the speaker did not say “Allahu Openbar”

The Dementors take a short break during the filming of ‘Harry Potter.”

Thursday contest is already shaken and not stirred.