A Texas 9th Grader named Ahmed Mohammed was arrested because school officials and police refused to believe that the clock he built wasn't a bomb. 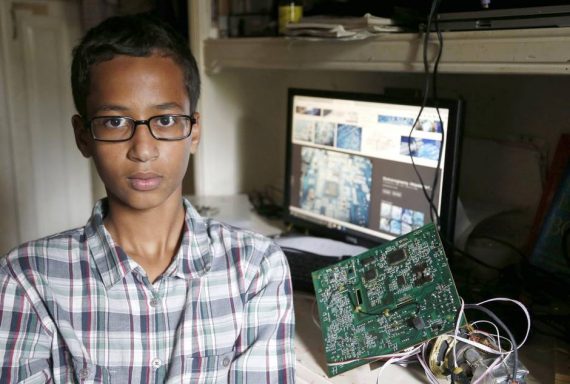 A Ninth Grade student in Texas was arrested and placed in handcuffs for building a clock:

IRVING — Ahmed Mohamed — who makes his own radios and repairs his own go-kart — hoped to impress his teachers when he brought a homemade clock to MacArthur High on Monday.

Instead, the school phoned police about Ahmed’s circuit-stuffed pencil case.

So the 14-year-old missed the student council meeting and took a trip in handcuffs to juvenile detention. His clock now sits in an evidence room. Police say they may yet charge him with making a hoax bomb — though they acknowledge he told everyone who would listen that it’s a clock.

So he decided to do what he’s always done: He built something.

Ahmed’s clock was hardly his most elaborate creation. He said he threw it together in about 20 minutes before bedtime on Sunday: a circuit board and power supply wired to a digital display, all strapped inside a case with a tiger hologram on the front.

He showed it to his engineering teacher first thing Monday morning and didn’t get quite the reaction he’d hoped for.

“He was like, ‘That’s really nice,'” Ahmed said. “‘I would advise you not to show any other teachers.'”

He kept the clock inside his school bag in English class, but the teacher complained when the alarm beeped in the middle of a lesson. Ahmed brought his invention up to show her afterward.

The teacher kept the clock. When the principal and a police officer pulled Ahmed out of sixth period, he suspected he wouldn’t get it back.

They led Ahmed into a room where four other police officers waited. He said an officer he’d never seen before leaned back in his chair and remarked: “Yup. That’s who I thought it was.”

Ahmed felt suddenly conscious of his brown skin and his name — one of the most common in the Muslim religion. But the police kept him busy with questions.

The bell rang at least twice, he said, while the officers searched his belongings and questioned his intentions. The principal threatened to expel him if he didn’t make a written statement, he said.

“They were like, ‘So you tried to make a bomb?'” Ahmed said.

“I told them no, I was trying to make a clock.”

Ahmed never claimed his device was anything but a clock, said police spokesman James McLellan. And police have no reason to think it was dangerous. But officers still didn’t believe Ahmed was giving them the whole story.

meantime, Ahmed’s been suspended, his father is upset and the Council on American-Islamic Relations is once again eyeing claims of Islamophobia in Irving.

A box full of circuit boards sits at the foot of Ahmed’s small bed in central Irving. His door marks the border where the Mohamed family’s cramped but lavishly decorated house begins to look like the back room at RadioShack.

“Here in high school, none of the teachers know what I can do,” Ahmed said, fiddling with a cable while a soldering iron dangled from the shelf behind him.

He loved robotics club in middle school and was searching for a similar niche in his first few weeks of high school.

“We have no information that he claimed it was a bomb,” McLellan said. “He kept maintaining it was a clock, but there was no broader explanation.”

Asked what broader explanation the boy could have given, the spokesman explained:

“It could reasonably be mistaken as a device if left in a bathroom or under a car. The concern was, what was this thing built for? Do we take him into custody?”

Police led Ahmed out of MacArthur about 3 p.m., his hands cuffed behind him and an officer on each arm. A few students gaped in the halls. He remembers the shocked expression of his student counselor — the one “who knows I’m a good boy.”

Ahmed was spared the inside of a cell. The police sent him out of the juvenile detention center to meet his parents shortly after taking his fingerprints.

They’re still investigating the case, and Ahmed hasn’t been back to school. His family said the principal suspended him for three days.

“They thought, ‘How could someone like this build something like this unless it’s a threat?'” Ahmed said.

Here’s a video where Ahmed describes what happened:

The school district has also sent home a letter to parents about the incident:

There’s a more readable version of the letter here.

On the surface, this is yet another example of the paranoia that has enveloped society in general and public education in particular regarding potential threats from students. Ever since the Columbine shooting in 1999 and everything that has followed it, schools have increasingly adopted so-called “zero tolerance” policies aimed at anything that even remotely suggests the idea of violence. This has led to extreme absurdities that have been reported in the media over the years, such as schoolchildren being disciplined for playing a schoolyard game and using their fingers as simulated guns, and even a child who was reprimanded for shaping a Pop-Tart into something allegedly resembling a gun. In almost none of these cases have these policies ever actually prevented a violent attack or uncovered a threat that authorities otherwise would not have been aware of. Indeed, most of the successful attacks in schools that have occurred have been situations where there had been no warning at all that the perpetrator would become violent. Additionally, statistics make clear that schools are actually safer today than they ever have been in that reported violence or attempted violence is at an all-time low compared to other times in the past. Proponents of the “Zero Tolerance” policies will claim, obviously, that the increase in school safety is attributable to those policies, but there’s simply no evidence to support that. More importantly, notwithstanding the fact that schools are safer, the rhetoric from school districts, law enforcement, and the media leads one to believe that they are in fact more dangerous than ever before. This leads to paranoia on all fronts, and precisely the kind of absurd situations that would have been dismissed as nothing to worry about decades ago. In this case, it led to a 9th grader with an interest in robotics being treated as a criminal and a terrorist even though there was no evidence that the device he had in his backpack was anything other than what he claimed it would be.

The fact that student’s name in this case is Ahmed Mohammad, and that his family is Muslim, of course, points to another source of paranoia in modern society. In the fourteen years since the September 11th attacks, there have been numerous instances of law-abiding Muslim-Americans and Muslim immigrants being harassed by members of the public and by law enforcement. Just a few days before the 14th anniversary of the attacks, a Sikh-American was attacked in Chicago by a group of white men who called him a terrorist and told him “go back to your country,” notwithstanding the fact that Sikhs aren’t even Muslim to begin with. According to one report of the incident involving Mohammed, one of the police officers who arrived at his school said  “Yup. That’s who I thought it was.” If Ahmed Mohammed had instead been named Davey Smith, how likely is it that the police would not have believed his explanation that he had built a clock, and how likely is it that they would have detained him for hours without contacting his parents, which may well be a violation of his rights? How likely is it that they would have then led him away from the school in handcuffs in front his teachers, staff, and his fellow students? I would suggest that it would have been incredibly unlikely, and that at the most the young boy’s parents would have been contacted and brought to the school to discuss the matter.

There is no justification for how this kid was treated. At the most, perhaps, he should have been admonished over bringing something to school from home that wasn’t part of an authorized school project. He should not have been treated as a criminal, and the fact that he was demonstrates that there is a lot wrong with the way schools handle students and with how law enforcement deals with people with Muslim names.

Update: President Obama had this message for Ahmed:

Cool clock, Ahmed. Want to bring it to the White House? We should inspire more kids like you to like science. It's what makes America great.

Photo via The Dallas Morning News

FILED UNDER: Education, Law and the Courts, Terrorism, US Politics