The Silver Bullet Edition OTB Caption ContestTM is now over. 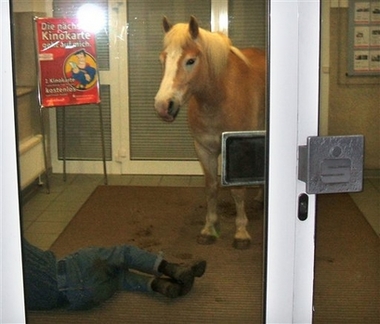 First: Bithead – I swear there was a naked girl in here a minute ago.

Second: Ator – You can lead a horse to water but it’s the rider that gets drunk at the pub…

Third: Michael – Warning Label: “Operate your Horse only in an open, well ventilated space as fumes can cause serious illness or death. Keep away from open flames or sparks.”

Bithead – Apparently, someone helped Jack off his horse.

Timmer – Once again the rumor that Kevin Aylward and Rodney Dill are the same person ran rampant through the internet.

Don Imus’ next chance at a radio show salvaged his career due to his award winning contest — “Horse, Jack-Ass, or John Kerry.”

Lessons in marketing — Godiva Savings and Loans found themselves facing financial ruin for only employing one-half of the iconic pair.

Eventually Ned was glad he’d received a Quarter-horse in change instead of five Buffalo nickels.

Unfortunately for the Lone Ranger, Silver had never been trained in the Heimlich Maneuver

DRUDGEBREAKING: Rosie O’Donnell seen leaving ABC after salary negotiations brokedown. Rosie wanted a yet undisclosed amount per appearance on ‘The View.’ ABC stated her value was a load of horse hooey. In her haste to depart Rosie inadvertantly stomped the visiting Donald Trump to death. Developing…