The Its Good To Be The Bull Edition OTB Caption ContestTM is now over. 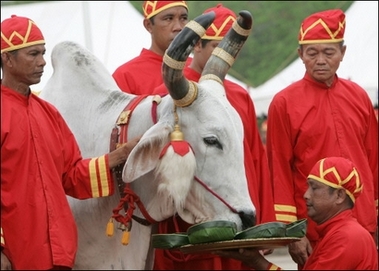 First: Bithead – Deja Moo: The feeling you’ve dealt with this bull before.

Second: William d’Inger – India enters the space race with a cow designed to jump over the moon.

Third: Scott_T – So is cowtipping like a hate crime there?

Alan Kellogg – Next week we’re using another method of selecting where to eat after the movie.

Methinks ‘The View’ is still catering to Rosie just a tad much.

“Man, I knew I should’ve taken those magic beans.”

Thursday Contest is ready for another price hike.