The Cardinal Sin Edition OTB Caption ContestTM is now over. 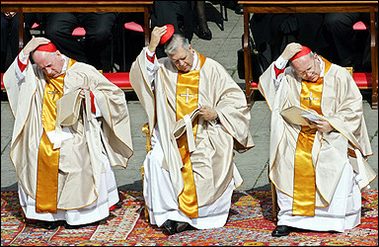 First: yetanotherjohn – I hate performance art. I just never seem to get it.

Third: Roger Ridenour – SAT question #163: Which one is different?

Steven Taylor – …and here we have the Catholic Church’s entry in the synchronized “I’m a Little Teapot” competition, which is slated to be an exhibition sport at the summer Olympics…

Maggie – Totally bored with the homily The Cardinals play their improvised version of “Duck, duck, goose.”

Three out of Three Cardinal’s prefer Hagar the Horrible to the Koran.

Under pressure from the Vatican, Viagra pulled its SuperBowl Ad.