Yesterday was not a good day for Charlie Crist.

First, in an interview with an Orlando TV station, Crist seemed to pretty clearly say that he would have voted in favor of the health care reform bill:

ORLANDO — Gov. Charlie Crist stopped by the News 13 studios Friday to sit down with The Agenda host, Scott Harris.

The conversation focused on the race for the Senate.

When asked how Crist would have voted on the healthcare bill if in the Senate at the time, Crist responded by saying, “I would have voted for it. But I think it can be done better, I really do.”

Back when the bill passed the House, however, Crist said something very different:

Gov. Charlie Crist lambasted the bill for being “comprised of secret back room, sweetheart deals” butressed by “a last minute [presidential] executive order,” and concluded by calling the legislation “a direct affront to the American people.”

Crist said, “Americans deserve better than this liberal, partisan legislation that amounts to a government take over of health care while raising rates, raising taxes and significantly cutting Medicare.”

Supporting the efforts in Tallahassee to launch an all out assault on the bill, former House Speaker Marco Rubio, now locked in a fierce U.S. Senate primary fight with Crist, said “Fortunately, this debate does not end today. And we cannot allow it to if our nation is to survive the failed politics and policies that have plagued Washington for far too long.”

So, Crist changed his mind on health care huh ? To appeal to Democrats, right ?

Florida Gov. Charlie Crist (I) is walking back comments he made in an interview earlier today about the recently enacted healthcare law.

Crist told a local TV station Friday that he would have voted in favor of President Obama’s healthcare proposal were he in the Senate. That was a reversal of his previous position against the healthcare law.

“I would have voted for it,” Crist said in the interview. “But I think it can be done better, I really do.”

But now, Crist says he “misspoke” in that interview. His campaign sent out a statement Friday afternoon clarifying Crist’s position on the healthcare law.

“If I misspoke, I want to be abundantly clear: the health care bill was too big, too expensive, and expanded the role of government far too much,” Crist said in a statement. “Had I been in the United States Senate at the time, I would have voted against the bill because of unacceptable provisions like the cuts to the Medicare Advantage program.”

Like I said, Charlie Crist had a bad day yesterday 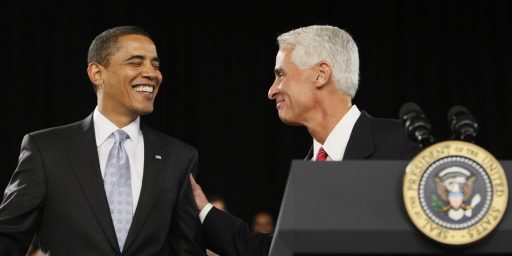