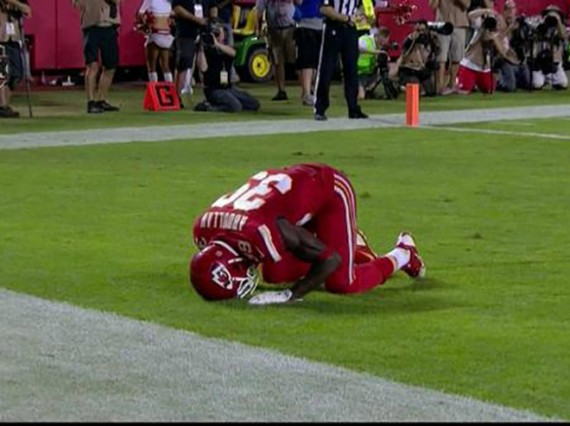 Kansas City Chiefs Safety Husain Abdullah was charged with an excessive celebration penalty after taking a position of prayer after scouring a touchdown off an interception in last night’s Chiefs routing of the Patriots, and some people are raising red flags:

Husain Abdullah is a devout Muslim. He’s also a safety for the Chiefs, and he made a promise to himself if he ever did find himself in the end zone.

“If I get a pick, I’m going to prostrate before God in the end zone,” Abdullah said.

“It’s a basic crossing route that we’ve probably walked through since training camp,” Abdullah said. “It was one of those things where he never saw me. He was looking at his receiver and I stole it.”

Abdullah then dashed 39 yards to the end zone, slid on his knees and bowed in prayer.

His celebration drew a 15-yard unsportsmanlike conduct penalty. Whether it was for the religious part of his celebration is unclear.

Rule 12, Section 3, Article 1 (d) of the NFL rulebook states that “players are prohibited from engaging in any celebrations or demonstrations while on the ground.”

There are exceptions made for religious expressions, such as Tim Tebow’s prayer while kneeling. But Abdullah may have broken the rule by sliding with both knees into the prayer.

“For me, I just got a little too excited,” Abdullah said. “I think it was for the slide.”

Game officials didn’t say anything to Abdullah after the play, but Chiefs coach Andy Reid did when Abdullah came to the sideline.

Although Reid isn’t sure that should be the case.

“When you go to Mecca, you should be able to slide wherever you want,” Reid said after the game. “We’ve got two priests in here. They’d probably vouch for me.”

On some level, I’m not sure whether it matters that the cause for the penalty was the prostate position or the slide that got him there. Personally, I’ve thought that the league’s penalty’s for end zone celebrations have been ridiculous and excessive for quite some time and this is perhaps the best demonstration of that. However, if it was the Muslim prayer position that led to the penalties then the NFL would have to explain why players who engage in Christian prayer under similar circumstances have not been penalized.

Update: The NFL’s Vice President for Communications said on Twitter this morning that Abdullah should not have been penalized:

Abdullah should not have been penalized. Officiating mechanic is not to flag player who goes to ground for religious reasons.

As it turned out, of course, the penalty had no real impact on the game in any case.