Chris Christie appeared on three Sunday morning shows today and, on each of them, he appeared to raise debate expectations for Mitt Romney:

“This whole race is going to be turned upside down come Thursday morning,” the Republican governor from New Jersey told CBS “Face The Nation” host Bob Schieffer Sunday. Christie pointed to the Republican presidential nominee’s performance in the primary debates, saying the debates will be an opportunity to speak with out being “filtered” or “spun” by Romney’s critics.

Interestingly, Christie’s comments were markedly different from other Romney surrogates who spoke about the debates today, such as Senator John McCain:

Arizona Sen. John McCain sought to lower debate expectations for Mitt Romney on Sunday, arguing that most presidential forums did not offer a breakthrough opportunity for either candidate.

“Sometimes we expect a major breakthrough, but that doesn’t happen very often,” McCain said on CNN’s “State of the Union.”

And Paul Ryan was similarly trying to lower expectations:

“Well, we’re running against an incumbent president. We’re running against an incumbent president with incredible resources. But more importantly, I don’t think one event is going to make or break this campaign,” said Paul Ryan said in an interview aired on ”Fox News Sunday”. “Look, President Obama is a very — he’s a very gifted speaker. The man’s been on the national stage for many years, he’s an experienced debater, he’s done these kinds of debates before. This is Mitt’s first time on this kind of a stage.”

Something tells me Christie wasn’t sticking to the script. 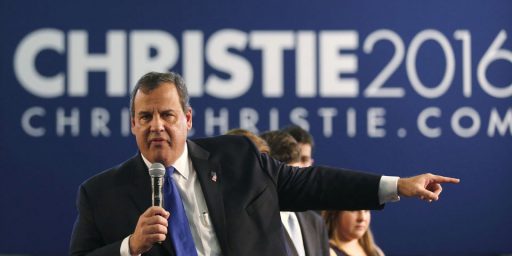