Trevor Phillips, chairman of the UK's Equality and Human Rights Commission, says fundamentalist Christians are a far bigger problem than Muslims. And, no, he's not anti-religion. 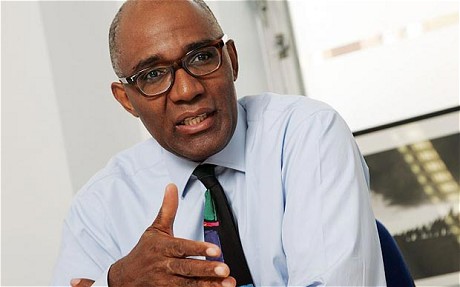 Trevor Phillips, chairman of the UK’s Equality and Human Rights Commission, says fundamentalist Christians are a far bigger problem than Muslims. And, no, he’s not anti-religion.

Trevor Phillips warned that “an old time religion incompatible with modern society” is driving the revival in the Anglican and Catholic Churches and clashing with mainstream views, especially on homosexuality. He accused Christians, particularly evangelicals, of being more militant than Muslims in complaining about discrimination, arguing that many of the claims are motivated by a desire for greater political influence.

But his actual comments are much more nuanced than that headline or lede suggests. (And, in fairness, Wynne-Jones puts the remarks in context later in the piece.) Here’s the main news article (“Trevor Phillips wades into debate on religion in modern society“) on the interview–also by Wynne-Jones:

In an interview with The Sunday Telegraph before the publication of a landmark report into religious discrimination over the last decade, he attacks “fashionable” views mocking and marginalising religion and say his Equality and Human Rights Commission will stand up for believers.
But he also warns religious groups of the danger of extremism, saying some Christian activists are not fighting for their religion but for political influence – and says that his own background as the son of immigrants from Guyana means he fears “undiluted” attitudes to homosexuality risk Afro-Carribean communities not integrating into the mainstream.

Mr Phillips today becomes one of the first and most high-profile figures in public life to warn people of faith feel “under siege” from “fashionable” anti-religious views – which he admitted the Equality and Human Rights Commission had been wrongly identified with. “The thing I’ve become anxious about in recent times is this – there is certainly a feeling amongst some people of belief that they are under siege, that they are often disadvantaged, that they are looked at and considered in some way different and their faith makes them less worthy of regard,” he said. “There is a view that says religion is a private matter and it’s entirely a choice. I think that’s entirely not right. “Faith identity is part of what makes life richer and more meaningful for the individual. It is a fundamental part of what makes some societies better than others in my view.

“I understand why a lot of people in faith groups feel a bit under siege. They’re in a world where there are a lot of very clever people who have a lot of access to the airwaves and write endlessly in the newspapers knocking religion and mocking God. The people who want to drive religion underground are much more active, much more vocal. There is no doubt there’s quite a lot of intolerance towards people of faith and towards belief. “There’s a great deal of polemic which is anti-religious, which is quite fashionable. People can sometimes think we’re part of that fashionable mocking and knocking brigade. We’re not that.”

After much more along those lines, he made his more controversial remarks:

In a highly provocative comment Mr Phillips said he believed Anglican and Catholic churches were seeing growing congregations from African and Carribean backgrounds with “old time” views which put them at odds with mainstream Britain.

“In the Christian and Muslim faiths migration has given some of the great faith institutions a massive shot in the arm,” he said. “I come from that kind of community. We like our faith strong and pretty undiluted. If you come from an Afro-Caribbean Christian background the attitudes to homosexuality are unambiguous, they are undiluted, they are nasty and in some cases homicidal.

“I think there’s an awful lot of noise about the Church being persecuted but there is a more real issue that the conventional churches face that the people who are really driving their revival and success believe in an old time religion which in my view is incompatible with a modern, multi-ethnic, multicultural society. “Muslim communities in this country are doing their damnedest to try to come to terms with their neighbours to try to integrate and they’re doing their best to try to develop an idea of Islam that is compatible with living in a modern liberal democracy.

So, he’s making a very nuanced point about the influence of immigration on religion in the UK, not comparing Christianity and Islam per se.