France's Christophe Lemaitre became the first white man to run the 100 meters in under 10 seconds when he clocked 9.98 on Friday. Untold blacks have done it since 1968. 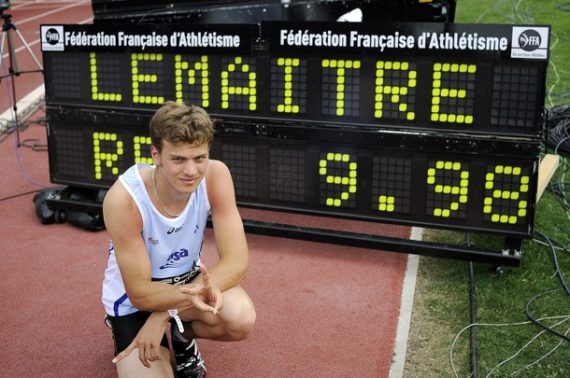 “France’s Christophe Lemaitre became the first white man to run the 100 meters in under 10 seconds when he clocked 9.98 on Friday, ” Reuters reports.

Matt Yglesias gets off what I presume is some snark:  “This is already making me uncomfortable. Are we going to administer some kind of genetic test to Lemaitre to check him for African genetic material? Does the one drop rule apply in these situations?”

Since there is no official record keeping of sporting statistics by race and thus no need for verification regimes, I take the story as a mere interesting footnote.

What is remarkable, however, is just how slow whites are in sprint events. Lemaitre’s time is a full four-tenths of a second off Usain Bolt’s world record.  American Jim Hines first broke the 10 second barrier 42 years ago — more than two decades before Lemaitre was born — and with a faster time than Lemaitre’s recent achievement.

I should note, too, that no such racial barriers exist in long distance running.  If one looks at the world record progression for the marathon, for instance, we see that the early winners were (presumably white) Europeans.   But Son Kitei of Japan held the record as early as 1935.  This was followed by a 17 year period of domination by Asians and then a very diverse group of record holders — Europeans, Russians, Americans, Aussies, Latin Americans — over the years.  Africans have come to dominate over the last dozen years but the history of the event makes one think others will still have a chance.