After three days of buildup to a "mystery speaker," the closing night of the Republican convention featured a rambling performance by Clint Eastwood and an empty chair. 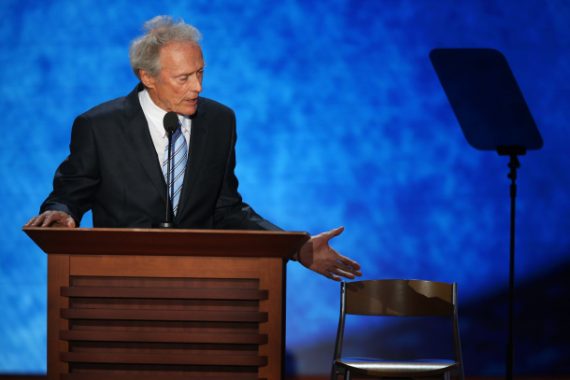 After three days of buildup to a “mystery speaker,” the closing night of the Republican convention featured a rambling performance by Clint Eastwood and an empty chair.

The Republicans launched their prime-time introduction to their presidential nominee, Mitt Romney, with a surprise guest. But actor and director Clint Eastwood’s more than 10 minutes on the national stage turned into an odd set-piece that featured the 82-year-old talking to an empty chair on the stage, meant to represent President Obama.

He rambled a bit about how there actually were some conservatives in Hollywood before mocking the election night celebration that greeted Obama four years ago. He described tearful celebrants, including Oprah Winfrey, and said, “I haven’t cried that hard since I found out there is 23 million unemployed people in this country.”

“Now that is something to cry about because that is a disgrace, a national disgrace, and we have not done enough. This administration has not done enough to cure that,” Eastwood said. “Whatever interest they have is not strong enough and I think, possibly now, it might be time for someone else to come along and solve the problem.

Toward the end of his performance, which cut deeply into the hour of prime time promised by the television networks to the Republicans, Eastwood repeated his displeasure with Obama. “When somebody doesn’t do the job,” Eastwood said, “you got to let them go.” That brought a huge round of applause, and Eastwood responded by pointing the invisible Obama off the stage.

Another awkward moment came when Eastwood hit the president for maintaining the war in Afghanistan and not noticing how the Russians “did there for 10 years.” The war has generally been supported by Republicans after being started in 2001 by President George W. Bush.

The performance came to an end when Eastwood complied with an audience shout-out for him to say his signature line, “Make my day!” The crowd joined in in booming voices and, with a slight bow, Eastwood left the stage.

That was almost precisely my reaction.

I’m not sure what in the hell Clint Eastwood is talking about or who he’s talking to or who the hell booked him.

Hell of a thing, going senile. Take away all he’s got and all he’s ever gonna have.

I will say this: Mitt Romney should look virile and coherent in comparison to this. Make my day.

Eastwood is 82 years old and an American icon, so I feel a little bad for piling on. But I’m truly baffled by the decision to allow him to open the night with a bizarre, unscripted skit. I can’t help but be reminded of another American icon, Admiral James Stockdale, and his bizarre turn in the 1992 vice presidential debate, which included the memorable opening statement, ”Who am I? Why am I here?”

For most Americans, that rambling performance in a debate he didn’t know he was participating in until the last minute is the only thing they know about Stockdale, a genuine American hero awarded the Medal of Honor for courage under horrible torture as a Vietnam POW that still inspires awe in the likes of John McCain. Eastwood, of course, has decades of his best work preserved on film, so his legacy won’t suffer the same blow as Stockdale’s.

UPDATE: Here’s a transcription of the remarks, courtesy NPR:

Save a little for Mitt.

I know what you’re thinking. You’re thinking, what’s a movie tradesman doing out here? You know they are all left-wingers out there, left of Lenin. At least that’s what people think. But that’s not really the case. There’s a lot of conservative people, a lot of moderate people, Republicans, Democrats, in Hollywood. It’s just that the conservative people by the nature of the word itself play it a little more close to the vest. They don’t go around hot-dogging it. So, uh … But they’re there, believe me, they’re there. I just think, in fact, some of them around town, I saw Jon Voigt, a lot of people around here in town.

John’s here, an Academy Award winner. A terrific guy. These people are all like-minded, like all of us.

So I — so I’ve got Mr. Obama sitting here. And he’s — I just was going to ask him a couple of questions. But, you know, about, I remember three-and-a-half years ago, when Mr. Obama won the election. And though I wasn’t a big supporter, I was watching that night when he was having that thing and they were talking about hope and change and they were talking about, yes we can, and it was dark outdoors, and it was nice, and people were lighting candles. And they were saying, you know, I just thought, this is great. Everybody’s crying. Oprah was crying.

I was even crying. And then finally — I haven’t cried that hard since I found out that there’s 23 million unemployed people in this country.

Now that is something to cry for because that is a disgrace, a national disgrace, and we haven’t done enough, obviously — this administration hasn’t done enough to cure that. Whatever interest they have is not strong enough, and I think possibly now it may be time for somebody else to come along and solve the problem.

I mean, what do you say to people? Do you just — you know — I know — people were wondering. You don’t? You don’t handle it.

Well, I know even some of the people in your own party were very disappointed when you didn’t close Gitmo. And I thought, well, closing Gitmo — why close that? We spent so much money on it. But, I thought maybe as an excuse.

Oh, What do you mean shut up?

PBS NewsHour/YouTube
Video: Clint Eastwood’s speech, from PBS NewsHour
OK, I thought it was just because somebody had the stupid idea of trying terrorists in downtown New York City. Maybe that was it.

I’ve got to, I’ve got to hand it to you. I’ve got to give credit where credit is due. You did finally overrule that finally. And that’s so, now we’re moving onward. I know, in the, you were against the war in Iraq and that’s OK. But you thought the war in Afghanistan was OK.

You know, I mean — you thought that was something worth doing. We
didn’t check with the Russians to see how they did there for 10 years.

But we did it, and it was, it’s something to be thought about and I think that when we get to maybe — I think you’ve mentioned something about having a target date for bringing everybody home and you give that target date, and I think Mr. Romney asked the only sensible question. He says, “Why are you giving the date out now? Why don’t you just bring them home tomorrow morning?”

So anyway, we’re going to have, we’re going to have to have a little chat about that. And then, I just wondered, all these promises and then I wondered about, you know, when the, What? What do you want me to tell Romney? I can’t tell him to do that. That. He can’t do that to himself.

Of course we all know Biden is the intellect of the Democratic party.

Just kind of a grin with a body behind it.

But I just think that there’s much to be done and I think that Mr. Romney and Mr. Ryan are two guys that can come along. See, I never thought it was a good idea for attorneys to be president anyway, because … Yeah.

You could still use the plane. Though maybe a smaller one. Not that big gas guzzler when you’re going around to colleges and talking about student loans and stuff like that.

You’re an ecological man. Why would you want to drive that truck around?

OK, well, anyway. All right, I’m sorry. I can’t do that to myself either.

But I’d just like to say something, ladies and gentlemen. Something that I think is very important. It is that, you, we, we own this country.

Yes, we own it. And it’s not you owning it and not politicians owning it. Politicians are employees of ours.

And, so, they’re just going to come around and beg for votes every few years. It’s the same old deal. But I just think that it’s important that you realize and that you’re the best in the world.

OK, just remember that. And I’m speaking out for everybody out there. It doesn’t hurt, we don’t have to be …

I do not say that word anymore.

We don’t have to be — what I’m saying, we don’t have to be metal masochists and vote for somebody that we don’t really even want in office just because they seem to be nice guys or maybe not so nice guys if you look at some of the recent ads going out there. I don’t know.

You want to make my day, huh?

Thank you. Thank you very much.

It reads nuttier than it looked live. As to why Eastwood was allowed to go on an unscripted rant, TIME’s Mark Halperin reports that it was a bait-and-switch.

Convention planners had assumed the Hollywood legend would reprise the powerful and typically gruff/charming performance he delivered at the beginning of August when he showed up out of the blue at a Romney fundraiser in Idaho and said he was backing the Republican.

Romney aides played down the impact Eastwood’s odd turn might have on Tampa’s positive impact, but they acknowledge that the empty-chair monologue came as a complete surprise to them. They simply turned the podium over to an iconic superstar and expected him to stand and deliver.

Imagine if the 10 pm ET hour had included the moving live testimonials from some of the people Romney has touched, leading into the extraordinarily well-produced campaign video intended to further humanize the candidate, leading into Romney’s speech. It is true that in recent years, the broadcast networks have balked at airing “propaganda” videos, but in this case, my educated guess is that this video would have made it onto most channels.

You know what happens when you assume, right?