No trial for Colorado Springs Planned Parenthood Robert Dear, at least not for now. 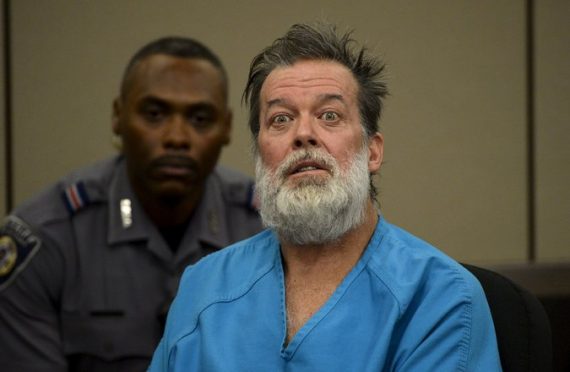 Robert Dear, the man who held a group of people hostage in a standoff at a Colorado Springs Planned Parenthood back in November has been found incompetent to stand trial:

He believes the FBI cuts holes in his clothes and leaves feathers in his home. That Robin Williams told a joke about President Obama, the “antichrist,” and committed suicide two weeks later. That President Obama will declare martial law and rebuild himself as the antichrist.

Those are just some of the “delusional beliefs” accused Colorado Planned Parenthood shooter Robert Lewis Dear shared with a detective who interviewed him after his November arrest.

Based on those statements and others Dear made to psychologists, a Colorado judge ruled on Wednesday that Dear was mentally incapable of participating in the case against him.

After two days of hearings in April and May, 4th Judicial District Judge Gilbert Martinez deemed Dear incompetent to stand trial for the time being.

The ruling puts the criminal case on hold while Dear undergoes treatment at the Colorado Mental Health Institute at Pueblo to restore him to competency, Martinez said.

Seeking to dispel perceptions that the ruling might indefinitely stall proceedings, Martinez told reporters after Wednesday’s hearing that “competency is a determination of the defendant’s current mental status.” Every 90 days hospital staff will send a report to the court on his status and whether they believe he is competent to stand trial. The first one is due August 11.

Dear, 57, is charged with 179 felony counts including murder and attempted murder in the November 27, 2015, shootings at a Planned Parenthood clinic in Colorado Springs.

Martinez ordered Dear to undergo a mental competency evaluation in December after his public defender raised questions about his competency.

Dear has repeatedly interrupted proceedings with outbursts, shouting at his attorneys and the judge, muttering to himself and declaring his guilt. Dear told the court in a December 9 hearing, “I am a warrior for the babies.” In a subsequent hearing Dear tried to fire his court-appointed lawyer, who also defended Aurora movie theater shooter James Holmes. Dear indicated he would not cooperate with the mental evaluation, telling Martinez, “I’m not going to say one word to them.”

Martinez noted in his ruling that Dear’s behavior was but one factor in his conclusion, in addition to evidence and testimony from two psychologists and the detective.

The psychologists told the court that Dear has long suffered from a “delusional disorder” that impairs his ability to have a “rational understanding” of the proceedings. Although he appears to understand the judicial process his “delusional beliefs are informing his decisions and his decisions are not based on logic,” the judge said in his ruling, paraphrasing the testimony of Dr. Jackie Grimmett.

His delusional thinking also impairs his ability to work with counsel, the judge concluded.

“Although he exhibited sufficient factual knowledge of the legal system and relevant personnel, his persecutory belief system is significantly impairing his ability to consult his lawyer,” the judge said, quoting Grimmet’s competency evaluation.

Prosecutors disputed that his behavior rose to the level of incompetency. Under cross-examination from prosecutors, Grimmet said Dear had an intact memory, appeared coherent and goal-oriented and familiar with facts of the case.

It’s important to note that this ruling has nothing to do with the question of Dear’s ultimate guilt or innocence, or the question of whether or not a mental health defense to the underlying charges would be successful. Instead, what the Judge has determined here is that Dear is presently so mentally delusional that the is unable to participate in his own trial or to consult with, work with, or instruct his defense counsel as to his wishes with regard to the case. Generally speaking, the standard that the defense must reach in order to obtain a finding such as this is so high that a Defendant must essentially be completely out of touch with reality in their present condition. It’s also worth noting that this ruling doesn’t necessarily mean that Deer would be successful in raising a mental health defense to the underlying charges. In raising that defense, Defendants are generally required to show that they were unaware of the nature of their actions and unable to appreciate that what they were doing was wrong, a standard that has become increasingly difficult for Defendants to meet ever since the reforms enacted in the wake of the attempted assassination of President Reagan in 1981.

As is generally the outcome in these types of cases, Dear is being placed in the prison medical system where he will be treated for his mental illness as best as possible and, if doctors are successful in returning him to a state of mental competence, then the prosecution can proceed with the charges against him. In many respects, the outcome here is similar to what happened with Jared Lee Loughner, the man who shot former Congresswoman Gabby Giffords and several others in January 2011. In May of that year, Loughner was found incompetent to stand trial and sent into the Federal Bureau of Prisons medical system for treatment. After more than a year of treatment, Loughner was found competent and, rather than go to trial, he plead guilty in August 2012. In November of that year, Loughner was sentenced to seven life sentences based on his plea. It’s impossible to know if Dear’s treatment will take that long. It may be that he can be treated in a shorter amount of time, or that it could take longer. In any case, at the very least Dear will not be on the streets because of that ruling and, assuming he can be treated, will ultimately face trial for his actions unless he chooses to plead guilty.