Common Ground Between Occupy Wall Street And The Tea Party 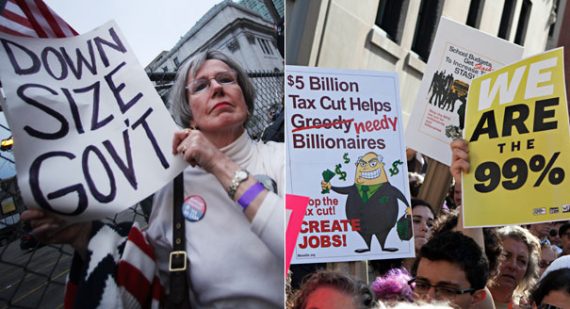 The ‘Occupy’ movement will never succeed against its “one percent” adversaries until it begins to understand that there is not a single one percent, but rather many.

An entire field of economics, known as “public choice,” studies how small, concentrated groups with similar interests generally prevail politically against larger groups of diffused interests. And, in our society, these concentrated interests – like unions, defense contractors, religious groups, farmers , etc. – are not necessarily part of the “one percent” Occupy talks about, and several have even joined or co-opted the Movement. But they are part of the broader one-percent problem.

I recently participated in a debate about the Occupy Movement at the university where I teach. The representative from Occupy Chicago claimed to be speaking on behalf of the 99 percent, but the problem is that there is no single coherent 99 percent.There are many 99 percents depending on the issue at stake, and any successful 99 percent movement must be more nuanced and draw finer lines than the Occupy Movement has so far.

When focused broadly on just income or wealth, the message of Occupy is too radical to represent anything close to 99 percent of Americans.

[T]here is something important about rhetoric of the one percent. “Public choice” economics explores the problems of concentrated interests. There are fewer corn farmers than taxpayers, and the gains from ethanol subsidies are large for each corn farmer, while the costs per taxpayer are quite small. The costs of coordination and the financial incentives mean the farmers will get their way so long as the government has the power to subsidize or penalize. This simple dynamic explains much of how our government allocates resources. And, unlike Marx or Citizens United, it is something the Tea Party and Occupy can agree upon. Although it may seem far-fetched at first glance, if Occupy found common ground with the Tea Party or the sentiments behind it, much could be done politically. After all, there are many 99 percents.

As I’ve said before, there is one way that the Tea Party and Occupy Wall Street are alike. Both movements make the mistake of only focusing on one institution as the cause of the problems they see around them. For the Tea Party its government, for the Occupy movement its business. What each side fails to recognize, though, is that what they each see as the sole cause of what’s wrong in this country is only half the story. The occupy movement is right to decry the extent to which banks and other large corporations are able to manipulate the rules-making or tax systems for their benefit, what they fail to recognize is the fact that the government has expanded beyond its proper boundaries to the point where it is able to manipulate the economy and pick winners and losers that causes businesses to spend so much time and money lobbying in Washington to protect their interests. The Tea Party is correct when it decries the vast expansion of government spending, the irresponsible load of national debt, and the continual intrusion of the Federal Government in new areas of life, but they fail to recognize that businesses are at least partly responsible for bringing that world about. If the two sides could see what they’re missing, they’d see that they’ve got more in common than they might think.

And, as I’ve said more than once, the 1% doesn’t just include bankers on Wall Street, it includes the people who have appropriated the levers of power in Washington to themselves for the benefit of their friends, whether those friends happen to be corn farmers in Iowa or union bosses in Detroit. There’s room for agreement here, but it requires both sides to recognize that there are enemies in government and in the businesses that benefit from their relationship with the government. As long as that situation is permitted to continue, then all those protests about “Big Government” on the right and “corporate greed” or “income inequality” on the left won’t amount to a hill of beans.

Henderson is on to something here, but I have to doubt that anyone is going to listen.