Congress vs. Obama on Libya

The War Powers Act's 90 day limit is in sight. Will Congress force the president's hand? 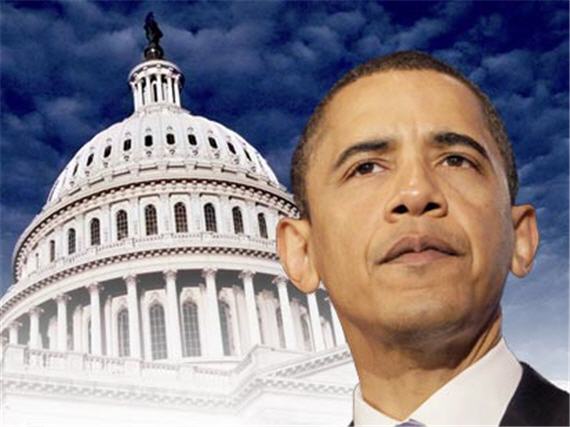 James Jay Carafano believes a showdown between Congress and the Obama administration on Libya is nigh:

Under the Capitol dome, there is no apparent consensus on the wisdom of the Libya adventure. But, more and more lawmakers seem to coming to the opinion that the president’s Libyan “strategy” is little more than hope—and they don’t like it.

The Oval Office hopes that Gaddafi trips over a bunker-busting bomb or that Turkey can somehow broker a deal that gives the Libyan leader an exit strategy. If that happens, the president will take credit for a regime change wrought by “leading from behind.”

He’ll also use the win to denigrate the push-back from the Congress—particularly from conservatives (even though members of both parties are chafing about the president’s war strategy. If hope pans out, it will be a win-win for the White House.

The problem for the president is that Gaddafi can read a calendar. In about two weeks, the deadline for the withdrawal of troops under the War Powers Resolution (WPR) will be up.

If he is still standing then, those unhappy with the president’s refusal to explain his rationale and military strategy (even those who know the WPR’s withdrawal provision is unconstitutional and don’t want to abandon NATO allies on the battlefield) may vote with the isolationists and War Power zealots to express their displeasure.

The resolution offered by Rep. Dennis Kucinich, D-OH, will easily pass in the House, and pressure for a similar vote in the Senate will be overwhelming. NATO allies will start to get really nervous about American commitment.

Gaddafi knows if he can hold out a few more weeks, he may be able to break NATO’s resolve or at least cut a better deal for the price of leaving the country.

Obama’s strategy makes sense only if the enemy in Libya does exactly what he wants. Enemies rarely are so accommodating–when they have options.

Gaddafi seems to still have options. The smart money is he can’t hang on forever–but he can hang on for two more weeks.

If the president’s relationship with Congress melts down over Libya, he will have no one but himself to blame. Congressional leaders in both parties don’t want to pick a fight with him over Libya, nor do they want the president to fail (even those who were not crazy about going in to begin with).

The better bet for Obama would be engage with the Congress now, agree on a way forward in Libya, and then ask Congress to endorse it. At least, that is how many on the Hill see it.

I opposed the Libyan intervention from the outset and have believed from the beginning that the “hope Gaddafi somehow falls” strategy was problematic. And it’s not unreasonable to suspect that even a large number of Democrats on the Hill agree with that assessment.

But it’s almost inconceivable that Congress will do anything about it. The War Powers Act is likely unconstitutional and the courts have shied away from trying to enforce what they consider a political question, so the 90 day limit isn’t going to do the work by its lonesome.

Will the House, which is controlled by Republicans who see beating Obama pass Kucinich’s bill? Well, maybe. But it’s awfully risky. If Gaddafi falls amidst the pressure, Obama will get credit for it, deserved or not, with the American public.

How about the Senate? Not a chance. The Democrats have a slim majority and are unlikely to want to embarrass their president. Beyond that, there are some neonconservative Republicans, John McCain most notable among them, whose chief complaint is that Obama hasn’t been aggressive enough. It’s a safe bet that there are at least 40 Senators who would steadfastly oppose any measure on this.

The Framers were banking that institutional jealousy would fuel checks and balances, overcoming factional loyalty. And there are some Members, especially in the Senate, who will defend the perquisites, power, and deference owed to their institution. But presidents have long had the whip hand on war policy and Congress has generally not had the spine or consensus to fight back.