Amanda Carpenter broke the news Tuesday that “The government Web site that promised to show exactly where the $787 billion in stimulus spending was going to ‘create or save’ jobs is allocating billions of tax dollars to hundreds of congressional districts that don’t exist.” For example, Recovery.gov shows 12 districts, using up more than $2.7 billion, in Washington, D.C, which only has one congressional district. [Actually, it has none. – jhj]

After being beat over the head with this on the blogs, Twitter, and the late-night comic shows, the White House admitted error and has said it’ll put out a more accurate list, while muttering something about distractions.

Aside from the obvious 57 states joke (which an Instapundit reader beat me to), I’ve dismissed this story as mildly amusing but no big deal.

It seems, however, that the House Government Reform and Oversight Committee is less than amused and will hold hearings on the matter. Others in Congress were also upset — and not just the usual suspects.

The errors raised the ire of Rep. Dave Obey, D-Wisconsin, and chairman of the House Appropriations Committee. On Monday, he said the mistakes “are outrageous and the administration owes itself, the Congress and every American a commitment to work night and day to correct the ludicrous mistakes.”

“Credibility counts in government, and stupid mistakes like this undermine it. We’ve got too many serious problems in this country to let that happen,” Obey said.

While I agree in principle, the reality is that large bureaucracies continually make incredibly boneheaded mistakes of this variety. The key is transparency, which lets interested parties quickly spot problems and get them corrected — as happened in this case.

It is, however, refreshing to see Congress investigate something that is actually under their purview and to do so with a president of the same political party that controls both Houses.  That’s how the system is supposed to work but, alas, frequently doesn’t. 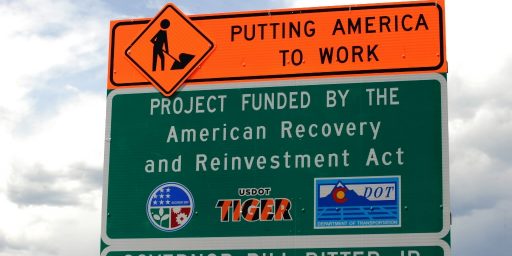