You've probably seen a lot of these signs popping up lately. 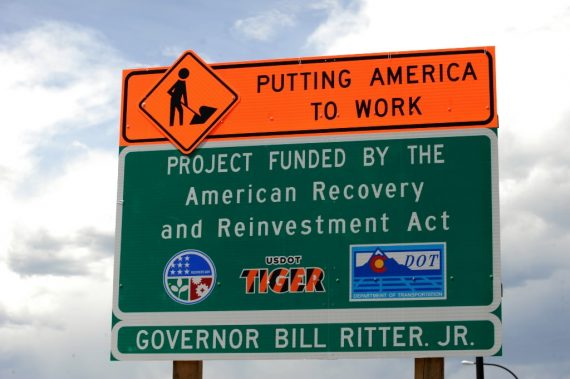 You’ve probably seen them at least once or twice in the past year, those signs informing us that whatever pothole-filling project happens to be tying up traffic at the moment was paid for by the 2009 “stimulus” package. Well, ABC News reports that those signs have been paid for with about $ 20 million of stimulus funds:

As the midterm election season approaches, new road signs are popping up everywhere  millions of dollars worth of signs touting “The American Reinvestment and Recovery Act” and reminding passers-by that the program is “Putting America Back to Work.”

On the road leading to Dulles Airport outside Washington, DC there’s a 10′ x 11′ road sign touting a runway improvement project funded by the federal stimulus. The project cost nearly $15 million and has created 17 jobs, according to recovery.gov.

However, there’s another number that caught the eye of ABC News: $10,000. That’s how much money the Washington Airports Authority tells ABC News it spent to make and install the sign  a single sign  announcing that the project is “Funded by The American Reinvestment and Recovery Act” and is “Putting America Back to Work.” The money for the sign was taken out of the budget for the runway improvement project.

ABC News has reached out to a number of states about spending on stimulus signs and learned the state of Illinois has spent $650,000 on about 950 signs and Pennsylvania has spent $157,000 on 70 signs. Other states, like Virginia, Vermont, and Arizona do not sanction any signs.

One state brags it posts signs but manages to keep the process cost-effective. The Tennessee Department of Transportation boasts, “There are a total of 324 signs statewide for a total cost of $12,931 and an average of $37.67 each.” The reason for the small cost, they say, is that their signs are small– about equal to a speed limit sign.

In response to questions by ABC News, Jill Zuckman of the Department of Transportation said, “The best estimate is that states have spent about $5 million of the $28 billion spent on road projects on signs  or less than .02 percent of overall project spending.”

Still, some Republicans are crying foul. Congressman Darrell Issa, Chairman of the House Committee on Oversight and Government Reform, sent a letter to Earl Devaney, Chairman of the Recovery Act and Transparency and Accountability Board, requesting an investigation to “determine the scope and impact of the Obama administration’s guidance” regarding signs to stimulus recipients.

Rep. Issa writes that the passage of the Stimulus Bill, “has provided an opportunity for the Obama administration to claim political credit for the various projects around the country that have been funded by this redistribution of taxpayer dollars.”

At the center of the controversy are a series of guidelines provided to stimulus recipients. In the letter, Rep. Issa cites what he calls “perhaps the most overly political guidance on stimulus advertising” involving the Department of Housing and Urban Development and a stimulus recipient. According to investigators from the oversight committee, HUD provided the Office of Native American Programs with information on “signage requirements.” The document suggested a sign template informing the public the projects had been, “Funded By: American Recovery and Reinvestment Act, Barack Obama, President.”

Congressman Aaron Schock (R-IL) has joined the chorus of Republican outrage over stimulus signs and claims at least $20 million has been spent on them. He told ABC News, “I think it’s a bit of an oxymoron to spend tens of millions of dollars of taxpayer money, borrowed money, on a bunch of signs to tell them how we are spending their taxpayer money.”

It’s hardly outrageous then, and at least you’ll know who to blame while your stuck in bumper-to-bumper traffic thanks to road construction.