Vermont Senator Bernie Sanders may think otherwise, but many Americans do care about Hillary Clinton's use of a private email server while Secretary of State.

During Tuesday night’s Democratic Debate, Vermont Senator Bernie Sanders received a lot of attention and praise from Democrats when he came to the defense of Hillary Clinton regarding the stories surrounding her use of a private email server while Secretary of State:

Bernie Sanders’ exasperation with the subject of Hillary Clinton’s private email server made for the most replayed moment of Tuesday night’s Democratic debate, according to TiVo.

“Enough of the emails!” Vermont Sen. Sanders said after moderator Anderson Cooper pressed Clinton about her use of private email when she was secretary of state. “Let’s talk about the real issues facing America!”

The digital-video recorder maker TIVO, released a list of its top 10 debate moments on Wednesday, a day after the five Democratic presidential hopefuls met for their first debate of the 2016 White House campaign. TiVo used anonymous data from about 30,000 households.

The Sanders campaign even emphasized the moment, which seemingly benefits his chief opponent more than it does him, on its Twitter feed:

Best line of the night: “The American people are sick of hearing about your damn emails, @HillaryClinton." #DebateWithBernie

As The Washington Post’s Philip Bump notes, though, the assertion that nobody cares about the issues surrounding Clinton’s email server doesn’t stand up when you look at the polling:

To assess that, we turn to other polling. The Post, in partnership with ABC News, has repeatedly asked whether the e-mail server issue is a legitimate one for the campaign. In May, a plurality of respondents said it was. By September, a plurality said it wasn’t. But in both months, opinion was pretty evenly split.

At least overall. When you look at how members of each political party respond, the picture is very different.

Democrats think this is not a legitimate issue. Republicans think it is. And independents are split.

That’s one poll. CBS and the New York Times asked a different version of the question last month: Are you satisfied with the responses Clinton has given on the issue? Those who said they were not satisfied, one would logically assume, are interested in hearing more about the e-mails.

The question was asked in March and September, and the number who who said they were not satisfied with what they’d heard grew substantially.

Bump’s point is best illustrated by referring to the charts accompanying his post, so here’s one that shows the partisan breakdown on a question asking if the email issue is a “legitimate campaign issue”: 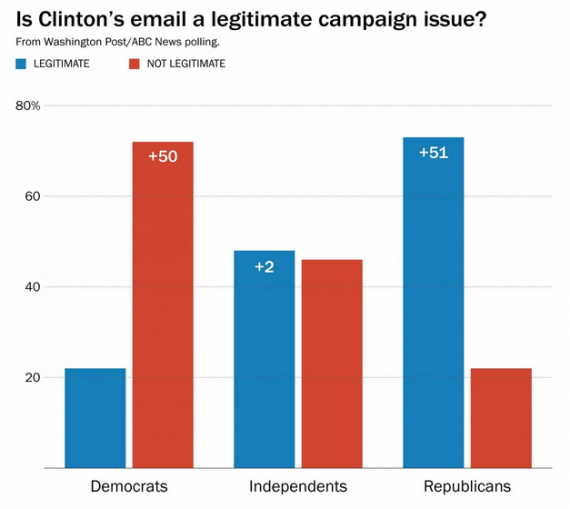 It’s no surprise, of course, that large numbers of Democrats don’t believe the email story is a legitimate campaign issue and that large numbers of Republicans believe that it is. This is to be expected from partisans on both sides of the aisle. The interesting numbers lie in the middle, where we see that a plurality of Independent voters believe that it is an legitimate issue. This is consistent with other polling that we’ve seen over the summer that show that American voters are concerned about the story and that they aren’t necessarily satisfied with Clinton’s response to the questions that have arisen about the issue since the story first broke back in March and April when she dismissed the use of a private server as simply a matter of not wanting to have to carry more than one mobile device at a time.

A second chart shows the response to a question from a September New York Times/CBS News poll asking voters if they were satisfied with Clinton’s response to questions regarding the issue: 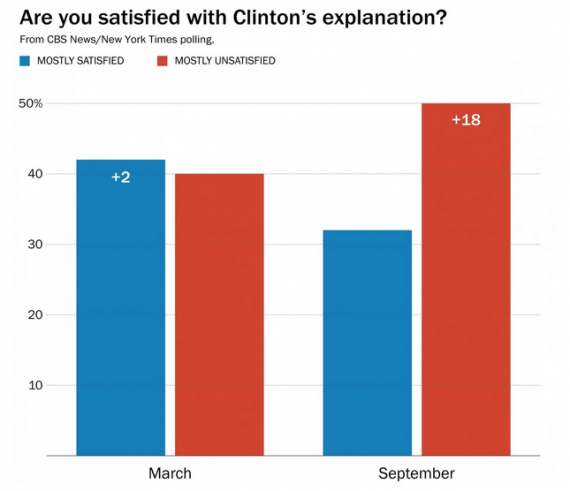 As we can see here, while the public was largely satisfied with Clinton’s initial response to the controversy, over time that has changed to the point where the majority of those polled are not satisfied with her explanations in the wake of the additional information that has come out over the past six months. Looking deeper into the crosstabs for this poll, we see the same expected partisan breakdown between Democrats and Republicans on the question of whether respondents are satisfied with Clinton’s responses. Among independents, though, we see that 49% of self-identified Independents said that they were not satisfied with Clinton’s responses regarding the use of a private email server and that roughly 1/3 of Independents said that the controversy had negatively impacted their opinion of Hillary Clinton. While that’s not a majority, and it’s not likely to have much of an impact in the race for the Democratic nomination, it’s certainly a substantial number of Americans.

As Bump goes on to note, Sanders was certainly correct in saying that Democratic voters and those likely to vote in Democratic primaries and caucuses don’t care very much about the Clinton email story. For that reason, even though it likely helped Clinton to some degree that neither he nor any of the other candidates decided to use it as a cudgel during the debate, making this kind of comment is unlikely to really hurt Sanders very much in the context of the race of the nomination. Looking more broadly, though, it seems clear that Sanders was incorrect:

The idea that Americans on the whole think the e-mail issue doesn’t bear additional examination, though, is incorrect. Clinton is tired of the topic, as Sanders certainly is. But those who consider Clinton the likely Democratic nominee and hope to ensure that she doesn’t win the presidency, the issue is very much alive and will be a big part of the conversation for the next 12 months.

The Clinton email story is unlikely to be the most important issue of the 2016 Presidential race, and Clinton may well win notwithstanding it, but the suggestion that Sanders and others have made that voters don’t care about the issue simply doesn’t stand up to examination. That’s why it’s an issue that is likely to be around for the rest of this campaign right up until the General Election.