Coping With the Worst of the Election Season As it gets closer and closer to November 4th, it’s inevitable that more and more of the worst parts of election season are now upon us. Conspiracy theories whose stupidity are matched only by their irrelevance will start entering the media cycle about once per day–and on the internet about once per hour, if not faster. Time which could be profitably spent discussing something important is instead spent by talking heads trying to figure out if Tina Fey and Sarah Palin have ever actually been the same room together. It’s frustrating, but there’s really only one cure: whiskey.

The problem is, times are tough financially right now, too. And as a general rule, whiskey is expensive. This is why I’ve taken it upon myself to talk up three great whiskeys which can help you get through election season without driving you into debt in the process.

First up, if you’re a bourbon man, I highly recommend Russell’s Reserve, which is a 10 year barrel aged bourbon made by Wild Turkey’s master distillers. It’s got a great balance of flavor, is nice and smooth going down, and best of all, usually goes for around $20.

Second, if you like a good single malt scotch, and you also like to accompany that scotch with a fine cigar, you can’t go wrong with the Dalmore Cigar Malt, which has a strong, malty taste behind which is a delightful medley of citrus, as well as a strong, smoky flavor throughout. It perfectly pairs with a good cigar, especially a cigar with some spice to it like the Don Lino Africa or a Camacho Corojo. Better still, most places sell a bottle of this fine stuff for $30–which is an absolute steal.

If you prefer an Irish whiskey, you absolutely cannot go wrong with Michael Collins. For about $20 a bottle you get one of the most complex, smooth tasting Irish whiskeys I’ve ever had the privilege to drink. They have a single malt, too, which I haven’t tried yet but intend to soon.

So there you have it–three great, inexpensive whiskeys to help you through the remainder of election season. If you have any other suggestions, feel free to drop them in the comments. I always like to try a new brand, and the bottles run dry a bit faster with the prospect of another Presidential debate this week.

Update (Steve Verdon): In keeping with the idea of inexpensive, yet good, alcoholic beverages I feel I must point to Laphroig’s 10 year old single malt scotch whisky. Now this isn’t a whisky for everyone. It is one of the most…errr…flavorful whiskies out there. It has a strong taste of smoke and peat with a hint of the ocean to it. Most people either love it or hate it, but the price is pretty reasonable by scotch standards (my local Beverages and More sell it for $30.99). Recomended way of drinking it: room temperature with a splash of water. I’ve found it goes well with most types of cheese, chocolate and butter cookies, smoked salamon, and chocolate chip cookies. 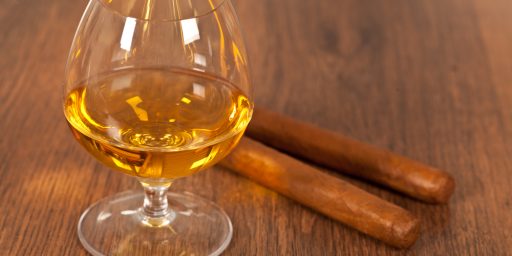