Could The House Lawsuit Against Obama Cost The GOP The Senate?

In what would be a classic bit of political irony, polling indicates that the House lawsuit against the President could make Democrats more likely to vote in November.

A new McClatchy-Marist poll indicates that the House GOP’s lawsuit against President Obama could end up being something that gets Democrats to the polls in November:

The lawsuit against President Barack Obama could have a negative effect against Republicans, a new poll shows.

A majority of Americans also oppose the lawsuit altogether. Overall, 58 percent said the House should not sue Obama, with a 87 percent of Democrats opposing it, compared to 57 percent of Republicans.

These numbers are largely consistent with other polling from CNN/ORC International and CBS News which showed that, with the exception of Republicans, a majority of Americans opposed the House lawsuit against the President. Now we have a poll that suggests that the lawsuit, which will likely be filed at some point prior to the November elections, could end up being something that causes Democrats to get out and vote in an election where, in many states, turnout will likely be key in determining who controls the Senate starting in January. The battle for the Senate is likely to be a close one to begin with, and in states like Louisiana, Arkansas, and North Carolina turnout is going to play a huge role in deciding who wins and, likely, whether the Majority Leader in January is Harry Reid or Mitch McConnell. If the House lawsuit ends up causing more Democrats to come out for Mary Landrieu, Mark Pryor, or Kay Hagan then it could end up being the deciding factor.

There is, of course, some irony in the possibility that the House lawsuit could end up causing more Democrats to come out to vote in November. As I’ve said before, it’s rather obvious that the political purpose of the lawsuit is to both placate that portion of the Republican Party that favors impeaching President Obama, which polling indicates to be a majority of self-identified Republicans, and to rile up the enthusiasm of the most active wing for the GOP in preparation for the General Election. There would be some irony, then, if instead it ended up getting enough Democrats and Independents upset that the GOP fell short of grabbing the Senate for the third straight election, especially since the odds of the GOP being able to gain control of the Senate in 2016 or 2020 look to be pretty low just based on the make up of the classes of Senators that would be up for re-election in those years. By the time the year is over, then, Republicans may end up regretting this lawsuit not just because it has no legal merit, but because it ended up being a political loser. 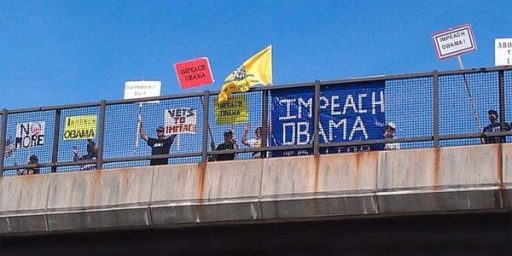