A Homeland Security database of national monuments, chemical plants and other structures vulnerable to terror attacks is too faulty to accurately help divide federal funds to states and cities, according to the department’s internal watchdog.

The report noted that Indiana has 8,591 assets listen in the database — more than any other state and 50 percent more than New York. New York had 5,687 listed. It did not detail which ones, but the Homeland Security assessment of New York this year failed to include Times Square, the Empire State Building, the Brooklyn Bridge or the Statue of Liberty as a national icon or monument. [emphasis added]

Makes you feel safer already, doesn’t it? It’s nice to know that a mere four years after the Department of Homeland Security was founded, they still haven’t managed to figure out that the Statue of Liberty is a national freaking monument.

I keep getting emails in my inbox from the GOP explaining how the Bush Administration is “serious” about terrorism. But how can a person honestly believe that if, after four years, they still haven’t even identified critical infrastructure that might serve as potential terrorist targets? Hell, your average 6 year old could get the Statue of Liberty and the Empire State Building right. If DHS hasn’t even identified potential terrorist targets, how can they expect to defend those sites?

Update: Homeland Security Watch has more on the “garbage in, garbage out” nature of the critical infrastructure database. 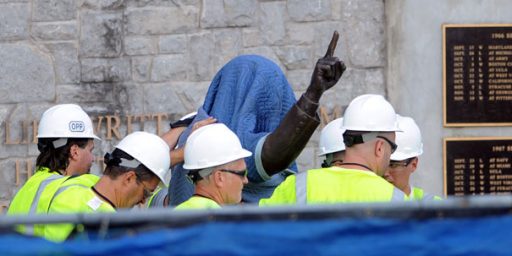