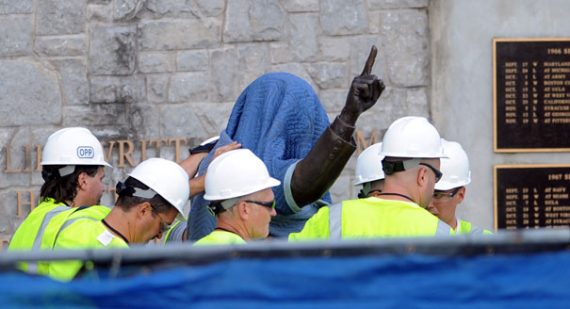 As anticipated, the statue of former football coach Joe Paterno was removed from in front of Beaver Stadium this morning:

STATE COLLEGE, Pa. — The famed statue of Joe Paterno was taken down from outside the Penn State football stadium Sunday, eliminating a key piece of the iconography surrounding the once-sainted football coach accused of burying child sex abuse allegations against a retired assistant.

Workers lifted the 7-foot-tall statue off its base and used a forklift to move it into Beaver Stadium as the 100 to 150 students watching chanted, “We are Penn State.”

The university announced earlier Sunday that it was taking down the monument in the wake of an investigative report that found the late coach and three other top Penn State administrators concealed sex abuse claims against retired assistant coach Jerry Sandusky.

The statue, weighing more than 900 pounds, was built in 2001 in honor of Paterno’s record-setting 324th Division 1 coaching victory and his “contributions to the university.”

A spokeswoman for the Paterno family didn’t immediately return phone and email messages.

Construction vehicles and police arrived shortly after dawn Sunday, barricading the street and sidewalks near the statue, erecting a chain-link fence then concealing the statue with a blue tarp.

Penn State President Rod Erickson said he decided to have the statue removed and put into storage because it “has become a source of division and an obstacle to healing.”

“I believe that, were it to remain, the statue will be a recurring wound to the multitude of individuals across the nation and beyond who have been the victims of child abuse,” Erickson said in a statement released at 7 a.m. Sunday.

He said Paterno’s name will remain on the campus library because it “symbolizes the substantial and lasting contributions to the academic life and educational excellence that the Paterno family has made to Penn State University.”

The statue’s sculptor, Angelo Di Maria, said it was upsetting to hear that the statue had been taken down.

“It’s like a whole part of me is coming down. It’s just an incredibly emotional process,” Di Maria said.

“When things quiet down, if they do quiet down, I hope they don’t remove it permanently or destroy it,” he said. “His legacy should not be completely obliterated and thrown out. … He was a good man. It wasn’t that he was an evil person. He made a mistake.”

The bronze sculpture has been a rallying point for students and alumni outraged over Paterno’s firing four days after Sandusky’s Nov. 5 arrest — and grief-stricken over the Hall of Fame coach’s Jan. 22 death at age 85.

But it turned into a target for critics after former FBI Director Louis Freeh alleged a cover-up by Paterno, ousted President Graham Spanier and two Penn State officials, Athletic Director Tim Curley and Vice President Gary Schultz. Their failure to report Sandusky to child-welfare authorities in 2001 allowed him to continue molesting boys, the report found.

The action was inevitable, I think. At some point after the students returned, the statue would have become a rallying point for the supporters and critics of Paterno and just would have led to more problems. Besides, after what was revealed in the report, Paterno no longer deserves to be recognized as a hero. If the Paterno family is offended by that, well that’s their problem.