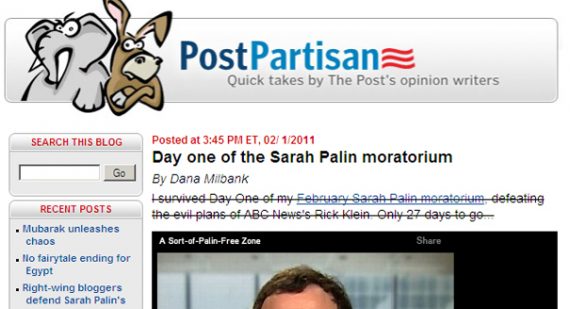 Following up on Dodd Harris’s piece from last night, it would appear that Dana Milbank’s self-imposed Sarah Palin moratorium wasn’t broken after all:

Dana Milbank just shot over an e-mail letting us know it wasn’t him who posted – under his name – an item on the Post Partisan blog pointing out that he had “survived” the fist day of his month-long Palin “moratorium.”

We posted an item earlier highlighting criticism from PalinLand directed at Milbank after the Post columnist went on ABC’s “Top Line” to talk about how he wasn’t going to be talking about Palin.

To make the case, we pointed to a blog post under Milbank’s byline pointing to his interview and written in the first person that read: “I survived Day One
of my February Sarah Palin moratorium.”

We asked Milbank for comment, and he wrote back: “Say it ain’t so, Joe! I appreciate you bringing this to my attention. I didn’t know about the text on the Post-Partisan item with the ABC video, and I had our website fix that. So as far as the moratorium goes, fear not: I am still a virgin.”

The post now includes text noting that the text from Tuesday night had not been written by Milbank.

Personally, I think the whole moratorium idea is silly, as I noted here.