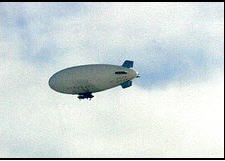 Yes, there was a strange blimpy object flying over some government buildings in Washington before dawn this morning. But no, it’s nothing to worry about. It’s on our side. It was, in fact, a blimp.

The Army has leased it from the nation’s only airship manufacturer and outfitted it with sensors and cameras. Throughout the week, the 178-foot-long lighter-than-air craft will conduct test runs over the Washington area designed to determine how effective electro-optical and infrared cameras aboard are at detecting potentially threatening movements on the ground.

The equipment already is used in Iraq and Afghanistan to identify enemy troop movement, but in combat zones it is attached to a static inflatable device that looks like a giant, blimp-shaped balloon.

If this works, the uses could be endless. For example, it would be an excellent way to film sporting events.