Another new poll brings bad news for Democrats and the President. 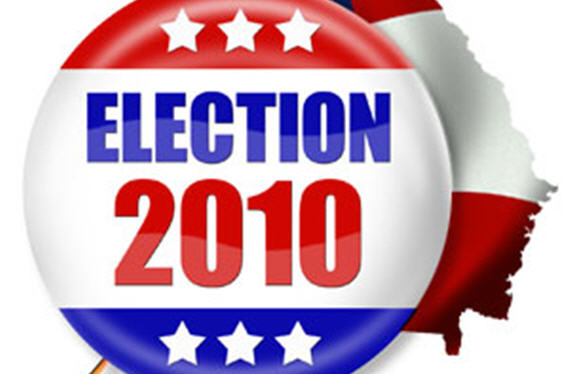 A new poll released by Democracy Corps, the polling and consulting firm run by James Carville and Stan Greenberg, has some very bad news for President Obama and Congressional Democrats:

Democracy Corps, a polling firm run by Democratic operatives James Carville and Stanley Greenberg, put out its latest findings today, and they should have party leaders reaching for the antacids. The news is almost uniformly bad for Democrats just four months ahead of the next election.

As the authors note in their overview: “With the recovery barely visible and Democrats still behind on the economy, progressives should not seek a mandate based on their performance, but on their advocacy for ordinary people versus Wall Street and on where they want to take the country.”

That’s another way of saying that the only thing that polled worse than the Democrats was Wall Street (30%-42%). The poll put the right track-wrong track numbers for the country at 32%-61%, the worst they have been since President Obama took office.

Perhaps of most concern, though, is the fact that the poll seemed to show that some of the more extreme Republican talking points seem to be resonating with the public:

Deep in the poll, they ask, “Now, I am going to read you a list of words and phrases which people use to describe political figures. For each word or phrase, please tell me whether it describes Barack Obama very well, well, not too well, or not well at all.”

In other words, 55 percent of likely voters think “socialist” is a reasonably accurate way of describing Obama.

Whether these perceptions are true or not, the fact that they’re resonating with a majority of the public at this point is a serious problem for the Democrats. The McCain campaign spent most of the month of October 2008 trying to tag Obama with the “socialist” label. Now, it seems to have stuck and the main reason for that seems to be public dissatisfaction with the President’s policies.

I think the most important number, though, is the right track/wrong track number I highlighted above. Here’s what it looks like: 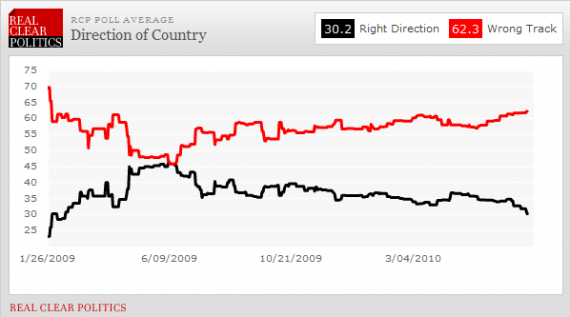 Essentially, the public is as dissatisfied with the direction of the country today as it was during the early days of the Obama Administration during the height of the financial crisis, and the “wrong track” trend has been expanding since the height of the health care reform debate last summer. Given the fact that the economy is unlikely to recover significantly between now and the election, this is potentially dangerous for incumbent Democrats. The electorate seems to be angry, worried, and looking for the change they thought they were getting in 2008. Watch out, Democrats. 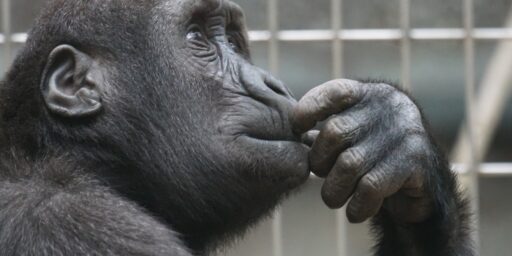