Have we all been fooled by a 75 year old marketing campaign? 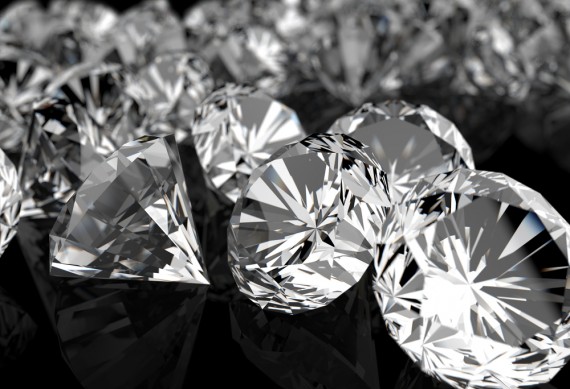 The entire tradition of giving diamonds as engagement rings turns out to be the most successful marketing campaign in history:

American males enter adulthood through a peculiar rite of passage – they spend most of their savings on a shiny piece of rock.

They could invest the money in assets that will compound over time and someday provide a nest egg.

Instead, they trade that money for a diamond ring, which isn’t much of an asset at all. As soon as you leave the jeweler with a diamond, it loses over 50% of its value.

Americans exchange diamond rings as part of the engagement process, because in 1938 De Beers decided that they would like us to. Prior to a stunningly successful marketing campaign 1938, Americans occasionally exchanged engagement rings, but wasn’t a pervasive occurrence.

Not only is the demand for diamonds a marketing invention, but diamonds aren’t actually that rare. Only by carefully restricting the supply has De Beers kept the price of a diamond high.

Countless American dudes will attest that the societal obligation to furnish a diamond engagement ring is both stressful and expensive. But here’s the thing – this obligation only exists because the company that stands to profit from it willed it into existence.

This is a story that’ been related before, so it really  shouldn’t be unfamiliar. The idea that giving a diamond ring as part of proposing marriage has a long history is, in reality, mostly untrue. Yes, there are stories about wealthy people, and members of royal families giving such gifts as part of a betrothal, but it most certainly was not part of the practice of what would today be called  the middle or lower classes until de Beers began its marketing campaign. Even when it was, though, the kind of diamond that were given were typically very small. My maternal grandmother got married in the late 1920s and the diamond in her ring is a 1/4 Carat at best, and admittedly I do not know for sure if she got that ring when my grandfather proposed to her,  or at some later date in their marriage (I would imagine that it’s the second).  Even the ring that my mother received would be considered paltry by contemporary standards. Nonetheless, I am certain that, in both cases, they appreciated them completely.

Today, though, there seems to be an ever increasing effort to make what the “proper” engagement ring ought to look like even more extravagant.  There used to be a general rule that a guy should spend two months’ salary on an engagement ring. For all I know, it may still be the “general rule.” Where it came from, I cannot possibly fathom, because two months’ salary for someone in their mid-2os with just a high school education is far different, even in today’s economy, from someone in their late 20s with a college education. And yet, the diamond PR industry continues to increase the mythos that the measure of how much a man loves you is how big a diamond he gives you.

Now, some people will argue that diamonds are, at the very least, a good investment because they continue to increase in value. However, an increase in price is not necessarily the same thing as an increase in value and, as an article in The Atlantic in 1982 pointed out, there was then, and remains to this day, a bias in the industry against reselling diamonds that makes it less profitable than you might think:

Selling diamonds can also be an extraordinarily frustrating experience for private individuals. In 1978, for example, a wealthy woman in New York City decided to sell back a diamond ring she had bought from Tiffany two years earlier for $100,000 and use the proceeds toward a necklace of matched pearls that she fancied. She had read about the “diamond boom” in news magazines and hoped that she might make a profit on the diamond. Instead, the sales executive explained, with what she said seemed to be a touch of embarrassment, that Tiffany had “a strict policy against repurchasing diamonds.” He assured her, however, that the diamond was extremely valuable, and suggested another Fifth Avenue jewelry store. The woman went from one leading jeweler to another, attempting to sell her diamond. One store offered to swap it for another jewel, and two other jewelers offered to accept the diamond “on consignment” and pay her a percentage of what they sold it for, but none of the half-dozen jewelers she visited offered her cash for her $100,000 diamond. She finally gave up and kept the diamond.

Retail jewelers, especially the prestigious Fifth Avenue stores, prefer not to buy back diamonds from customers, because the offer they would make would most likely be considered ridiculously low. The “keystone,” or markup, on a diamond and its setting may range from 100 to 200 percent, depending on the policy of the store; if it bought diamonds back from customers, it would have to buy them back at wholesale prices. Most jewelers would prefer not to make a customer an offer that might be deemed insulting and also might undercut the widely held notion that diamonds go up in value. Moreover, since retailers generally receive their diamonds from wholesalers on consignment, and need not pay for them until they are sold, they would not readily risk their own cash to buy diamonds from customers. Rather than offer customers a fraction of what they paid for diamonds, retail jewelers almost invariably recommend to their clients firms that specialize in buying diamonds “retail.”

While the article speaks of potential challenges to the de Beers diamond monopoly that seemed to be developing 31 years ago, but which never played out, it is still a very good, albeit long, read if you’re interested in the economic and marketing of just how a simple piece of crystallized carbon that is far more common than the PR campaigns would lead you to believe suddenly turned into something that every many must buy the woman he loves, if he truly loves her.

Here’s how it happened:

We like diamonds because Gerold M. Lauck told us to. Until the mid 20th century, diamond engagement rings were a small and dying industry in America. Nor had the concept really taken hold in Europe. Moreover, with Europe on the verge of war, it didn’t seem like a promising place to invest.

Not surprisingly, the American market for diamond engagement rings began to shrink during the Great Depression. Sales volume declined and the buyers that remained purchased increasingly smaller stones. But the US market for engagement rings was still 75% of De Beers’ sales. If De Beers was going to grow, it had to reverse the trend.

And so, in 1938, De Beers turned to Madison Avenue for help. They hired Gerold Lauck and the N. W. Ayer advertising agency, who commissioned a study with some astute observations. Men were the key to the market:

Since “young men buy over 90% of all engagement rings” it would be crucial to inculcate in them the idea that diamonds were a gift of love: the larger and finer the diamond, the greater the expression of love. Similarly, young women had to be encouraged to view diamonds as an integral part of any romantic courtship.

However, there was a dilemma. Many smart and prosperous women didn’t want diamond engagement rings. They wanted to be different.

The millions of brides and brides-to-be are subjected to at least two important pressures that work against the diamond engagement ring. Among the more prosperous, there is the sophisticated urge to be different as a means of being smart…. the lower-income groups would like to show more for the money than they can find in the diamond they can afford…

Lauck needed to sell a product that people either did not want or could not afford. His solution would haunt men for generations. He advised that De Beers market diamonds as a status symbol:

“The substantial diamond gift can be made a more widely sought symbol of personal and family success — an expression of socio-economic achievement.”

“Promote the diamond as one material object which can reflect, in a very personal way, a man’s … success in life.”

The next time you look at a diamond, consider this. Nearly every American marriage begins with a diamond because a bunch of rich white men in the 1940s convinced everyone that its size determines your self worth. They created this convention – that unless a man purchases (an intrinsically useless) diamond, his life is a failure – while sitting in a room, racking their brains on how to sell diamonds that no one wanted.

This doesn’t mean that buying a diamond ring as an engagement ring is wrong, or that it’s right. As the Business Insider article notes, there is this entire concept of intrinsic value that essentially says that individuals assign value to items that aren’t necessarily related directly to their economic value. Indeed, one of the great insights of the Austrian School of Economics is the entire idea  of the Subjective Theory of Value, which in its simplest terms means that different individuals place different values on different things and that those subjective values are what work together via the price mechanism to set prices. Whether because of marketing, sentiment, or tradition, there are many people who now place great value on the idea of giving and receiving a diamond ring as a promise of marriage. That may change at some point, but it’s unlikely that it’s going to happen any time soon.

So, no, I’m not judging the idea of diamond engagement rings, but I suppose it’s worth recognizing that the origins of this practice are far less romantic than the television commercials would have us believe.