California Congressman Duncan Hunter Jr. will remain in office for the rest of 2019 notwithstanding his guilty plea.

Duncan Hunter Jr., who pled guilty earlier this week to charges related to embezzlement of campaign finance laws has announced that he will resign at the end of this year, answering a question that had hung over his head since the guilty plea was made official:

Rep. Duncan Hunter (R-Calif.) said Friday he will soon resign his seat in Congress, bowing to the inevitable after pleading guilty this week to illegally using campaign finance funds for personal matters.

In a statement, Hunter said he would resign “shortly after the holidays,” but the sixth-term Republican did not specify a date. The House is expected to return from its holiday recess on Jan. 7.

“Shortly after the holidays, I will resign from Congress,” Hunter said. “It has been an honor to serve the people of California’s 50th District, and I greatly appreciate the trust they have put in me over these last 11 years.”

Since Hunter’s guilty plea on Tuesday, congressional leaders have been circling to seek his resignation, and the House ethics committee sent him a letter Thursday warning that he would run afoul of House rules if he voted on the floor following his criminal conviction.

Hunter’s departure completes a long fall for the San Diego Republican, a veteran who succeeded his father in the seat. His career unraveled as questions about his campaign spending spurred a federal investigation, leading Hunter, 42, to agree with prosecutors this week that he and his wife had channeled some $150,000 toward themselves.

The mounting legal troubles cost Hunter his clout in Washington, as Republican leadership stripped him of committee assignments and contributed to a Democrat coming within a few points of unseating him in 2018. Sensing his weakness, multiple Republicans had already declared they would seek his seat in 2020.

While Hunter’s exit was widely anticipated after his guilty plea, his formal decision to forfeit his seat helped clarify the 50th District landscape — and drew an attack from a Republican contender, former San Diego city councilman Carl DeMaio, who accused Hunter of manipulating his resignation timeline to avoid a special election for the duration of his term. California’s primary election filing deadline was Friday, meaning it’s at Gov. Gavin Newsom’s discretion whether to call a special election.

“The voters of the 50th District deserve having their voice back in Congress as soon as possible, and only a special election can give the voters a voice again,” DeMaio said in a statement.

Hunter’s decision was, of course, inevitable. Had he tried to remain in office until his sentencing or beyond it he likely would have been summarily expelled from Congress. As it was, Hunter had already been told by the House Ethics Committee that he was ineligible to vote on the floor due to his conviction and he had previously been stripped of his committee assignments due to his indictment, so there was literally nothing for him to do in Congress at this point.

As Jazz Shaw notes at Hot Air, his decision to wait until the start of 2020 to step down leaves Gavin Newsom, California’s Governor, with several options under state law. First, Newsom could decide to schedule a Special Election for the Spring that would fill the seat until Election Day, Second, Newsom could decide to leave the seat open until the General Election in March, which would constitute both a Special Election for the remainder of Hunter’s term and the new term beginning in January 2021 This, of course, would deprive the GOP of a vote on the floor for most of 2020. The last option is notable because Hunter’s district is solidly red and it’s likely that he’ll ultimately be succeeded by a Republican. Hunter, of course, will likely be in prison and unable to vote regardless of what option the Governor chooses. 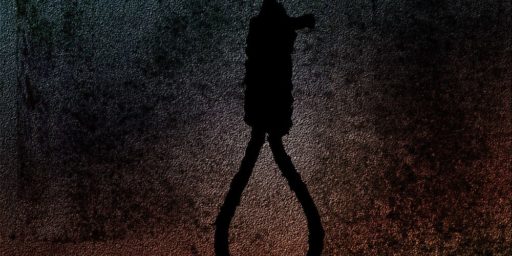 Democrats and the Death Penalty