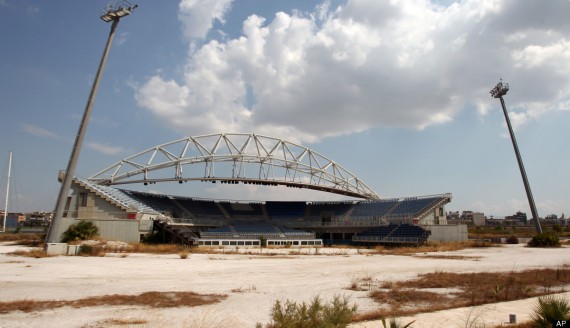 As the London Olympics enter their second week and Michael Phelps stands on the verge of winning his 22nd Olympic Medal, the venue where he won his first one in 2004 stands as a symbol to Greece’s broken economy and the boondoggle they invested in when they agreed to host the Olympics:

There’s still one group that loves the training pool for athletes at the former Olympic village in Athens’ northern fringe.

They appear to delight in sitting on debris that floats on the half-filled pool’s murky waters.

The athletes village itself has fared somewhat better, turned into housing for workers.

Eight years after the 2004 Athens Games, many of the Olympic venues Greece built at great expense remain abandoned or rarely used. They are the focus of great public anger as the country struggles through a fifth year of recession and nearly three years of a debt crisis that has seen a surge in poverty and unemployment.

At the southern Athens venue for softball — a sport unknown in Greece and already out of the Summer Olympics — the occasional weed is all that remains on the dried-out field.

With no shortage of real beaches in Greece, the purpose-built beach volleyball stadium has seen minimal use in the past eight years, mostly just concerts.

Other Athens venues have fared better. The badminton hall has been converted into a popular theater venue, the former international Olympic broadcast center is a shopping mall and what was the main press center now houses ministry offices.

Greek politicians, meanwhile, are still struggling to deal with those years of excess spending, and many economists still question the country’s future in the 17-nation common euro currency.

According to some estimates, the Greeks spent some € 10 billion to host the games, including construction costs and the like but not including an additional nearly € 1 billion for additional security in light of fears of terrorism in the wake of the September 11th attacks. Something tells me that they could’ve found a better use for that money.