Top positions in the State Department are vacant, and there's only one person to blame for that.

Bloomberg reports that eight of the top ten positions at the State Department are currently unfilled:

The leadership of the U.S. State Department was already thin as Secretary of State Rex Tillerson flew back from an abbreviated trip to Africa on Monday night. Then came the bombshell: Tillerson was ousted, via a Twitter announcement by President Donald Trump.

Tillerson had spent his weekend in Africa fighting for his job after a middle-of-the-night White House call warning him that Trump was looking to shake-up his staff. But after returning to Washington at 4 a.m. on Tuesday, Tillerson didn’t think any decision was imminent. Then came the president’s tweet, which said CIA Director Mike Pompeo would be nominated as Tillerson’s replacement.

With his voicing cracking at a hastily arranged news conference, Tillerson praised his colleagues and urged senior staff to stay on through the transition. While he said he’d remain in his job through March 31, he said he was handing over all responsibilities to his deputy, John Sullivan.

Sullivan won’t have a lot of company in the job. Eight of 10 top jobs at the State Department are now vacant, either because staff have left, been fired or the posts were never filled. Those vacant assignments include positions overseeing the agency’s role in U.S. trade policy, stopping the spread of nuclear weapons, refugee issues and efforts to counter human trafficking.

This graphic makes the extent of the problem at the top of Foggy Bottom clear: 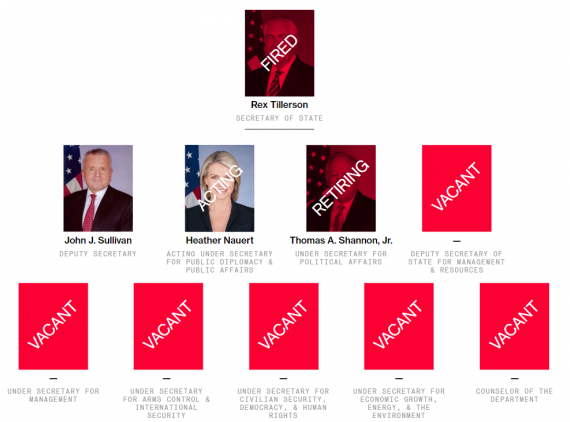 From the reports, it’s unclear where the responsibility for these vacancies lies. As other reports have noted, there has been much criticism of the management style of former Secretary of State Rex Tillerson, and there were reports of numerous departures by career foreign service personnel during his tenure due to low morale and other factors. At the same time, though, the Trump Administration has been slow to name people to fill key slots in the State Department, something that was the subject matter of several disputes between Tillerson and White House personnel over the course of the President’s first year in office. Whatever the reason, though, the fact that so many high-level positions in the department, as well as lower level positions in the diplomatic corps, have gone unfilled or been handed off too already overworked deputies, is a sign that the Trump Administration does not seem to be giving much priority to what is arguably the most important department in the Executive Branch.

This isn’t the only example of the problems that Trump Administration faces on the diplomatic front, as this list maintained by the American Foreign Service Association, Ambassadorial posts in many major nations remain vacant, including positions such as Ambassador to South Korea, a position that would seem to be rather important given the fact that we’re headed into a potential summit meeting between President Trump and Kim Jong Un, the leader of the DPRK. The idea that the White House hasn’t found qualified personnel for these positions lacks credibility. In any case, whatever the reasons for these vacancies and delays in appointments, there doesn’t really appear to be any valid excuse for why these positions are still vacant. We’re more than a year into the Trump Presidency now. There’s been more than enough time to vet potential candidates and to get them through the pre-screening process that candidates for such positions ordinary go through. In the past, Trump has blamed the slow pace of confirmations on Democrats in the Senate, but this is clearly a case of neglect that rests solely with the White House.