As Doug Mataconis predicted yesterday, the opening gambit of conservatives seeking a reason to deny Elena Kagan confirmation to the Supreme Court is to charge that she’s hostile to the military, as demonstrated by her decision as dean of Harvard Law School to deny military recruiters the right to officially visit the campus because the armed services discriminate against homosexuals.

“I think she made a big mistake,” said Alabama Sen. Jeff Sessions, who as the top Republican on the Judiciary Committee will be influential in determining GOP support for Kagan. “Was that disqualifying? I don’t know, we’ll see. But it’s a significant issue.”

“I thought it was just out of touch with reality,” Sessions said of Kagan, who currently serves as Obama’s solicitor general. “If she opposed the policy, let her advocate against it and urge it to be changed, but not deny the people who are defending the country, who are at that moment dying abroad for our freedom, to deny then the right to come on campus.”

Senate Minority Whip Jon Kyl said that Kagan was involved in the “advancing of a gay rights agenda over the Congress’ law over don’t ask, don’t tell.”  Kyl, an Arizona Republican, said the issue “raises the question of whether her own personal beliefs there would interfere with a decision that she might make relative to either an issue relating to gay rights or an issue relating to the military.”

Robert C. Clark, Kagan’s predecessor as dean as well as her former professor and the man who lured her back as a tenured faculty member and recommended her to succeed him, says this is all nonsense.   Essentially, Harvard long had an official policy — as did several other elite law schools — of excluding military recruiters from campus because of the discrimination issue.   In Harvard’s case, they nonetheless routinely allowed recruiters to visit campus unofficially at the behest of a student organization.    When Congress forced the issue through the Solomon Amendment — which happened during Clark’s tenure — they lifted the ban.  Later, the 3rd Circuit ruled that the Solomon Amendment was unconstitutional and Kagan, then dean, resumed the old policy.  When the Supreme Court reinstated the Solomon Amendment, she again lifted the ban.

Back in November 2004 when the 3rd Circuit issued its ruling, I wrote,

The court’s rationale here is plainly idiotic and I expect it to be overturned by the Supreme Court. Just like the Boy Scouts, private schools have the right to limit their association and bar groups that they adjudge discriminatory against homosexuals. Bob Jones University does that sort of thing. As a result, however, Bob Jones University gets denied federal funding. The Supreme Court upheld that ban in 1983.

Further, the federal government isn’t compelling the schools to even tacitly agree with the Defense Department’s policy on gays. The school could hold symposia condemning the practice, allow school-sanctioned groups to protest the policy, and so forth. They merely have to allow military recruiters access to school grounds to exercise their speech rights. And, if they find that burden too onerous, they can merely forego subsidy from the federal taxpayer.

Further, as I noted when the Supreme Court issued its unanimous ruling in March 2006, the animus against “the Defense Department” in this case was always misplaced because the ban on gays serving was “Congress’ policy as implemented in DoD regulations.”

Is Kagan, as Jim Hoft charges, “an anti-military loon”?  Hell if I know.*  But, certainly, there’s no evidence of it in this case.   As dean, she upheld what was doubtless a strong consensus view of her faculty and, indeed, the elite academy.  The fact that she’s a lesbian surely made it more personal to her but, again, she was merely doing what Clark and others did before her.  But, even during the brief period when she re-instated the “ban” on recruiters, she let recruiters on campus to do their job.   If she’s anti-military, she was exceedingly restrained in showing it.

*UPDATE:  Ilya Somin makes a pretty compelling argument that Kagan harbors no ill will against the military.  Aside from arguments already made in this post:

Finally, it’s worth noting Kagan’s 2007 speech at West Point, where she went out of her way to praise the military and emphasized that her stance on military recruitment was not an indictment of the armed forces as a whole:

I want to thank all of the cadets here this evening-not for attending this talk (I’m told it’s not optional!), but for all you will do to defend, protect, and strengthen this country. Each of you has made a decision-a profound commitment-· to join “the long grey line” of service. I am in awe of your courage and your dedication, especially in these times of great uncertainty and danger. I know how much my security and freedom and indeed everything else I value depend on all of you….

I don’t accept many outside speaking invitations; this may be the only talk of this kind that I’ll give this year. I accepted this invitation primarily to thank all of you senior cadets….

I have been grieved in recent years to find your world and mine, the U.S. military and U.S. law schools, at odds indeed,
facing each other in court — on one issue. That issue is the military’s don’t-ask don’t— tell policy. Law schools, including mine, believe that employment opportunities should extend to all their students, regardless of their race or sex or sexual orientation. And I personally believe that the exclusion of gays and lesbians from the military is both unjust and unwise….

But I would regret very much if anyone thought that the disagreement between American law schools and the US military extended beyond this single issue.

To be sure, Kagan could hardly take a generally negative stance on the military in a speech at West Point. But as she implied in the speech itself, if she were genuinely anti-military, she could simply have turned down the invitation (perhaps by pleading conflicting commitments, of which an HLS dean usually has many).

Now, I suppose, she could have given this speech to give plausible deniability on this matter and preserve her future political options.  But that seems like a stretch. 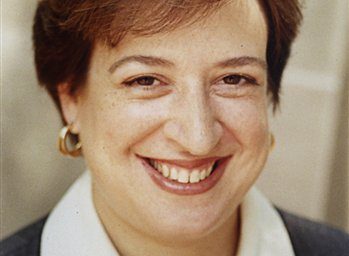 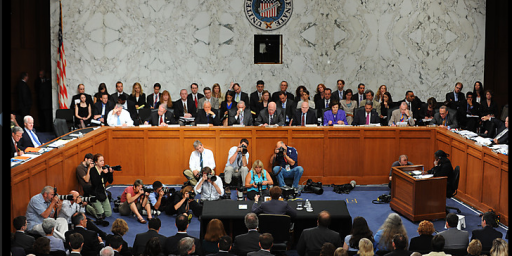