UPDATE: See Elena Kagan Not Gay After All? A week ago, Ben Domenech wrote a blog post about ten candidates rumored to be on the short list of nominees for replacing John Paul Stevens on the Supreme Court.  He asserted that Elena Kagan, Obama’s Solicitor General who is reputedly at the top of said list, “would please much of Obama’s base” and “follows [the] diversity politics of Sotomayor with [the] first openly gay justice.”   CBS News then secured permission to republish said post as a column in their online opinion section, which they did for Thursday’s edition.

The White House went into attack mode against conservatives and CBS.

The Obama administration charged CBS News with being out of line Thursday for suggesting that possible Supreme Court nominee Elena Kagan is out of the closet. She isn’t, according to a White House official, suggesting that a rumor campaign was being waged to trip up a potential Court candidacy.

Domenech later added an addendum stating, “I have to correct my text here to say that Kagan is apparently still closeted — odd, because her female partner is rather well known in Harvard circles.”

Then CBSNews.com added an editor’s note confirming, “A White House spokesperson said that Domenech’s reference to Ms. Kagan as gay is innaccurate.”

Gay rights groups weighed in, too, about the “whispering campaign.”   HuffPo’s Sam Stein:

Leading gay rights group are accusing Republicans of trying to rile up their conservative base by launching a whisper campaign against potential Supreme Court Justice Elena Kagan — suggesting the current Solicitor General is a closeted lesbian even though she’s not.

In its first entree into the upcoming Supreme Court nomination process, the group Human Rights Campaign blasted the increasingly public discussion of Kagan’s sexuality, calling it a play “straight out the right-wing playbook.”  “Even though the majority of Americans couldn’t care less about a nominee’s sexual orientation, the far right will continue to be shameless with their whisper campaigns to drum up their base and raise money off of prejudice,” Michael Cole, a spokesperson for the group emailed, in a statement to the Huffington Post

In a separate interview, Jean-Marie Navetta, spokeswoman from PFLAG — Parents, Families & Friends of Lesbians and Gays — accused people of trying to manufacture scandal out of thin air. “People love taking part in rumors like this, whether they’re gay or not, because it implies that there’s some sort of scandal going on there. And the bottom line is, it doesn’t matter and it shouldn’t matter,” she said. “But we hear it all the time… it’s a gossip point for people. And I think it could certainly be used, or be perceived to be used by some as a way to discredit [Kagan], even though we all know that it does not matter and it should not matter.”

CBS eventually bowed to pressure and pulled the posting altogether.    Not appending an editor’s note to the top correcting the story.  Not replacing the story with a placeholder explaining what happens.   Poof!  404! CBS initially refused to pull the posting, prompting Anita Dunn, a former White House communications director who is working with the administration on the high court vacancy, to say: “The fact that they’ve chosen to become enablers of people posting lies on their site tells us where the journalistic standards of CBS are in 2010.” She said the network was giving a platform to a blogger “with a history of plagiarism” who was “applying old stereotypes to single women with successful careers.”

The network deleted the posting Thursday night after Domenech said he was merely repeating a rumor. The flare-up underscores how quickly the battle over a Supreme Court nominee — or even a potential nominee — can turn searingly personal. Most major news organizations have policies against “outing” gays or reporting on the sex lives of public officials unless they are related to their public duties.

A White House spokesman, Ben LaBolt, said he complained to CBS because the column “made false charges.” Domenech later added an update to the post: “I have to correct my text here to say that Kagan is apparently still closeted — odd, because her female partner is rather well known in Harvard circles.”

CBS executives at first defended the column, noting that it appeared in an opinion section that contains contributions from blogs and publications on the left and right.

Dan Farber, editor in chief of CBSNews.com, said that Domenech’s column “just got through our filters” and that if his staff had seen “a controversial statement like that, we’d want to get more evidence of its accuracy” before publishing it. “But once it is out there,” Farber said, “the better approach is just to address it head-on rather than trying to sweep it under the rug.”

He changed his mind about yanking the column after receiving an e-mail from Domenech, which the blogger also sent to The Washington Post. Farber said in a statement that “after looking at the facts we determined that it was nothing but pure and irresponsible speculation on the blogger’s part.”

So, it’s under the rug!  No one can see it.  Unless they have the Internets, in which case they can see it at Domenech’s own site, New Ledger.

And even Domenech eventually apologized.

I offer my sincere apologies to Ms. Kagan if she is offended at all by my repetition of a Harvard rumor in a speculative blog post. But if I were her, I’d feel pretty good about the fact that the White House specifically responded to this — it seems like a clue as to who the pick will be, doesn’t it?

He is somewhat baffled by the whole thing, since his position is that “when the first openly gay nominee is advanced, it will be a true statement about how far we’ve come as a society.” Anyway, Domenech took to the pixels of HuffPo to explain the whole kerfuffle.

It’s an odd thing to get attacked by the White House for a blog post, and odder still when the attack is for something mentioned in passing, and intended to highlight a political positive about a potential Supreme Court nominee.

My recent blog post at The New Ledger, crossposted at CBS News, mentioned that I thought the appointment of Elena Kagan, along with potential nominees Pam Karlan and Kathleen Sullivan, would mark the first instance of an openly gay nominee to the Supreme Court. I included it as a political positive, describing it as a “Plus” that “would please much of Obama’s base.” The issue is already out there: Karlan and Sullivan are both openly gay, and one need not look too far for arguments being made on left-wing blogs that it would be an affirmative good to appoint a lesbian.

As Sam Stein writes: “The White House reacted strongly to the assertion, relaying that Kagan is, in fact, straight. It was the first public pushback by the administration in defense of any potential Supreme Court nominee.”

I erroneously believed that Ms. Kagan was openly gay not because of, as Stein describes it, a “whisper campaign” on the part of conservatives, but because it had been mentioned casually on multiple occasions by friends and colleagues — including students at Harvard, Hill staffers, and in the sphere of legal academia — who know Kagan personally. And as the reaction from Julian Sanchez and Matt Yglesias shows, I was not alone in that apparently inaccurate belief.

The links go to Twitter comments surprised that Kagan wasn’t “out,” since they’d just assumed it was common knowledge. Which, apparently, it was.

Now I realize that I was the gullible victim of a right-wing “whisper campaign,” launched in its latest incarnation by wingnuts who infiltrated gay advocacy site Queerty and tricked lefty Robert Iafolla into passing on the scurrilous rumors.

Both links predate Domenech’s post.  And Queerty describes Kagan as “the lesbian former Harvard Law dean” but notes “As we understand it, Kagan is out, but has not commented on her sexuality for reporters. But most notable about Kagan is not her sexuality, but her status: While all the Supreme Court’s sitting justices have been judges, Kagan has never held a bench seat.”

Did the WH not get the memo that Kagan’s not only a lesbian, but that she’s not really concerned about who knows it? Two days ago it would have been totally unremarkable if she walked out of a Georgetown or Cambridge restaurant holding her girlfriend’s hand. Now it would be a national event.

Because the Obama administration decided to make Kagan’s sexual orientation a capital-t Thing, she’s now in a position where either it looks like she’s hiding her homosexuality to advance her judicial career or – if she acknowledges she’s a lesbian – it looks like she’s being chased out of the closet. This isn’t as openly insulting as when the White House blasted concerned gay activists for being part of an Internet left fringe. But in a way it’s even more denigrating.

“Don’t worry Elena. This administration will mobilize all of our considerable resources to defend you from these venomous smears.”

It’s all truly bizarre.   We’re at the most gay-friendly time in American history and have, arguably, the most liberal administration ever on social issues.  And yet they’re treating casual mention of Kagan’s sexuality as a smear orchestrated by the Right?

Yes, of course, appointing a lesbian to the Supreme Court would trigger a political fight.  We’re much more tolerant of these things than we were ten or twenty years ago, but it’s still a controversial subject.   But the reaction makes no sense whatsoever.

Further, CBS should be ashamed.  What sort of journalistic ethics have they displayed here?  First, they republish a four-day-old column and don’t bother fact-checking?    Then, in response to pressure from the White House — at which point any journalist worth his salt would dig in, citing the sanctity of freedom of the press — they again don’t bother fact-checking but, instead, meekly pull the piece within hours?  Seriously?

UPDATE:   See Elena Kagan Not Gay After All? 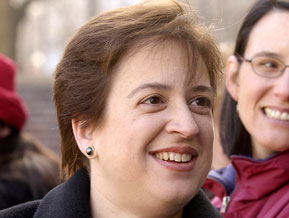 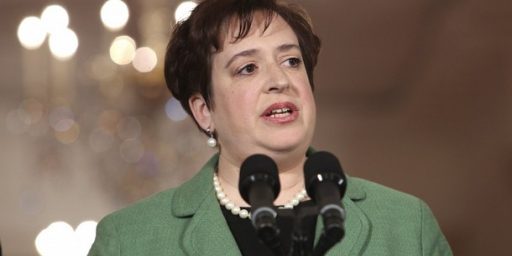