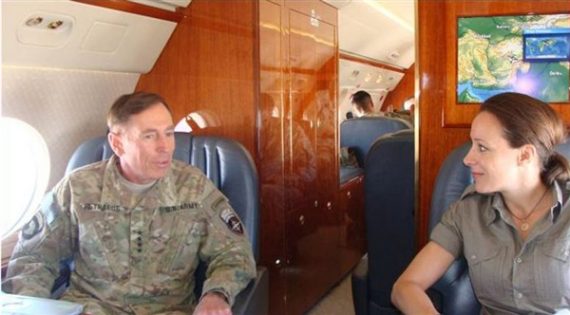 The Washington Post is reporting that the FBI probe that led to the discovery of former CIA Director David Petraeus’s affair with biographer Paula Broadwell was prompted by email threats allegedly sent by Broadwell to other women:

The collapse of the dazzling career of CIA Director David H. Petraeus was triggered when a woman with whom he was having an affair sent threatening e-mails to another woman close to him, according to three senior law enforcement officials with knowledge of the episode.

The recipient of the e-mails was so frightened that she went to the FBI for protection and help tracking down the sender, according to the officials. The FBI investigation traced the threats to Paula Broadwell, a former military officer and a Petraeus biographer, and uncovered explicit e-mails between Broadwell and Petraeus, the officials said.

When Petraeus’s name first surfaced, FBI investigators were concerned that the CIA director’s personal e-mail account had been hacked and security had been breached. But the sexual nature of the e-mails led them to conclude that Petraeus and Broadwell were engaged in an affair, the officials said.

Attempts to reach Broadwell and her relatives have been unsuccessful, and she has not made a public statement since she was linked with Petraeus on Friday.

We also have  a better idea of the timing of the investigation, and it appears to have been a relatively quick affair that was not brought to the attention of anyone in the White House until earlier this week:

The law enforcement officials did not provide an exact timeline for the investigation, but they said that the inquiry started at least several weeks ago. They said investigators thought they were dealing with a routine harassment case until they discovered the e-mails were traced to a private e-mail account belonging to Petraeus.

The initial concern was that someone had broken into the CIA director’s e-mail account, leading to concerns about potential security breaches, according to the officials. As the investigation proceeded and more e-mails emerged, along with Broadwell’s role, FBI investigators realized they had uncovered an affair between Petraeus and Broadwell, the officials said.

One of the law enforcement officials said Justice Department officials were unclear on what steps to take next because they had determined that there had been no crime and no breach of security.

It was not until Tuesday that the Justice Department notified James Clapper, the director of national intelligence, that compromising material about Petraeus had been uncovered as part of an investigation, according to a senior intelligence official. Clapper then spoke with Petraeus and told him to resign.

The official declined to say whether Petraeus had considered resigning at that point, but he said it was quickly clear to Clapper that stepping down was “the right thing to do” for Petraeus.

This would seem to answer the concerns that some have expressed over the past 24 hours that the investigation had been going on for some time and was kept quiet to avoid electoral repercussions. As for the report regarding the investigation itself, there were also reports earlier today that Petraeus had broken off the affair with Broadwell in July or August. One can suppose that this is what may have led to her striking out against this anonymous woman who she may have perceived as interfering in her relationship with the retired General whom she had apparently begin a relationship with when they first met in Afghanistan. The whole thing is beginning to take on the air of a soap opera.