The statute of limitations has expired. But he should never have been asked the question to begin with. 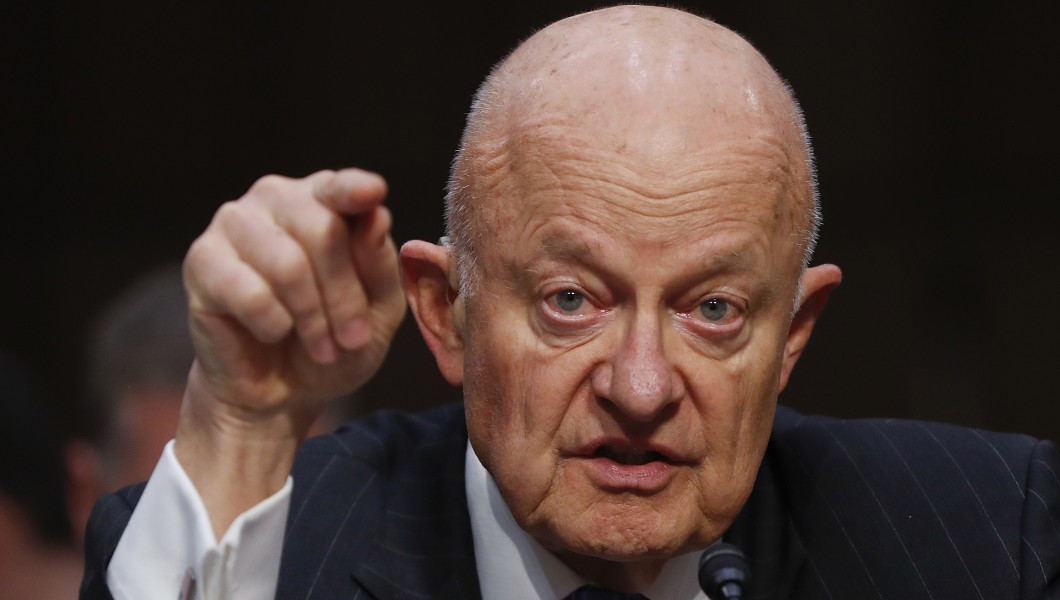 Then-Director of National Intelligence James Clapper lied to Congress five years ago. The statute of limitations ran out yesterday without him being charged.

Clapper, director of national intelligence from 2010 to 2017, admitted giving “clearly erroneous” testimony about mass surveillance in 2013, and offered differing explanations for why.

The under-oath untruth was exposed by National Security Agency contractor Edward Snowden, who sparked national debate on surveillance policy with leaks to the press.

Two criminal statutes that cover lying to Congress have five-year statutes of limitations, establishing a Monday deadline to charge Clapper, who in retirement has emerged as a leading critic of President Trump.

Many members of Congress, mostly Republicans supportive of new limits on electronic surveillance, called for Clapper to be prosecuted as the deadline neared, saying unpunished perjury jeopardizes the ability of Congress to perform oversight.

“He admitted to lying to Congress and was unremorseful and flippant about it,” Rep. Thomas Massie, R-Ky., told the Washington Examiner. “The integrity of our federal government is at stake because his behavior sets the standard for the entire intelligence community.”

“Political consideration should not affect the Department of Justice from pursuing this matter,” Rep. James Sensenbrenner, R-Wis., said ahead of the deadline. “Complete and truthful testimony is imperative for Congress to conduct effective oversight. It is clear from the evidence and Director Clapper’s own admission that he lied.”

Clapper’s problematic testimony occurred a few minutes before noon on March 12, 2013, when he told Sen. Ron Wyden, D-Ore., “No, sir,” and, “Not wittingly,” in response to a question about whether the NSA was collecting “any type of data at all” on millions of Americans. Wyden later said he provided the question to Clapper before the hearing and unsuccessfully asked Clapper to correct the record.

Clapper offered at least two different explanations for his inaccurate testimony. In a June 2013 apology letter, Clapper wrote that he gave the “clearly erroneous” answer because he “simply didn’t think of” the call record collection. But in an MSNBC interview the same month, he saidhe chose to give the “least untruthful” answer because he was “asked a, ‘When are you going to stop beating your wife?’ kind of question, meaning not answerable necessarily by a simple yes or no.”

In a January column for USA Today (“James Clapper’s perjury, and why DC made men don’t get charged for lying to Congress“) Jonathan Turley argued:

The expiration of the statute of limitations for Clapper will have the benefit of conclusively establishing that some people in this city are above the law. In a 2007 study, author P.J. Meitl found that “[a]lmost no one is prosecuted for lying to Congress.” Indeed, he found only six people convicted of perjury or related charges in relation to Congress, going back to the 1940s.

The problem is not that the perjury statute is never enforced. Rather it is enforced against people without allies in government. Thus, Roger Clemens was prosecuted for untrue statements before Congress. He was not given the option of giving the “least untruthful” answer.

Another reason for the lack of prosecutions is that the perjury process is effectively rigged to protect officials accused of perjury or contempt before Congress. When an official like Clapper or Nielsen is accused of lying to Congress, Congress first has to refer a case to federal prosecutors and then the administration makes the decision whether to prosecute its own officials for contempt or perjury. The result has almost uniformly been “declinations” to even submit such cases to a grand jury. Thus, when both Republicans and Democrats accused CIA officials of lying to Congress about the torture program implemented under former president George W. Bush, not a single indictment was issued.

For Clapper, the attempt to justify his immunity from prosecution has tied officials into knots. After Clapper lied before Congress and there was a public outcry, Clapper gave his “least untruthful answer” justification. When many continued to demand a prosecution, National Intelligence general counsel Robert Litt insisted that Clapper misunderstood the question. Still later, Litt offered a third rationalization: that Clapper merely forgot about the massive surveillance system. That’s right. Clapper forgot one of the largest surveillance (and unconstitutional) programs in the history of this country. Litt did not explain why Clapper himself said that he knowingly chose the “least untruthful answer.” Litt added, “It was perfectly clear that he had absolutely forgotten the existence of the … program … We all make mistakes.” Of course, this “mistake” was an alleged felony offense.

Clapper will establish a standard that will be hard to overcome in the future. He lied about a massive, unconstitutional surveillance program and then admitted that he made an “untruthful” statement. That would seem to satisfy the most particular prosecutor in submitting a case to a grand jury, but this is Washington.

As I argued in an August 2013 essay for The National Interest (“Clapper’s Bodyguard of Lies“) lying was likely his best option.

Indeed, Wyden himself unwittingly demonstrated this recently. He was justifiably upset that Director of National Intelligence James Clapper told him that the NSA was “not wittingly” collecting data on millions of Americans when, in fact, it was and Clapper knew it. That the intelligence community defines “collect” in a different way than the dictionary doesn’t change the fact that Clapper was intentionally trying to hide the existence of the program.

Then again, Wyden should have known better than to ask that question in a public hearing. It would not only have been foolish but illegal for Clapper to acknowledge the existence of a highly sensitive and classified program in that setting. So, Clapper was put in a position where he had to either lie or give an answer that tacitly revealed classified information. (Truthfully denying one program and then giving a “I can neither confirm nor deny” response regarding another makes it rather clear that the second program exists.) Clapper tried to avoid either path by giving an answer that was too cute, seemingly denying the program existed while not quite doing so. That was foolish and he was later forced to apologize.

The bottom line here is that, while some members of Congress are entitled to know what our intelligence community is doing, “Congress” isn’t. Some information is shared only with the chairman and ranking member of the House and Senate intelligence committees. Some is shared with the committees in whole but only behind closed doors, in sessions where they’re sworn to secrecy. Very little information is shared in public hearings and, frankly, we probably shouldn’t put too much in what is.

The bottom line, then, is that Clapper had little choice but to lie to Congress given Wyden’s stupidity in asking that question in open session.