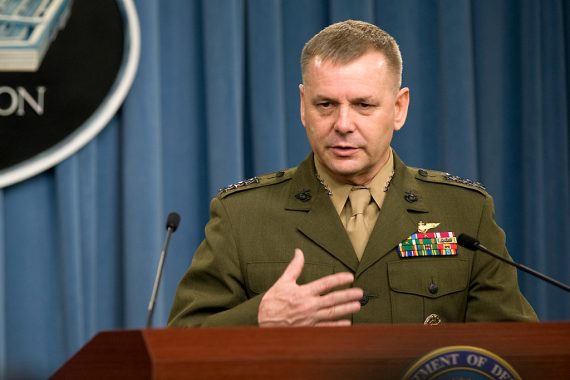 A retired Marine General who rose to become Vice Chairman of the Joint Chiefs Of Staff before retiring is the target in the investigation of who may have leaked the news of American involvement in development of the computer virus that was used to target Iran’s nuclear program:

Legal sources tell NBC News that the former second ranking officer in the U.S. military is now the target of a Justice Department investigation into a politically sensitive leak of classified information about a covert U.S. cyber attack on Iran’s nuclear program.

According to legal sources, Retired Marine Gen. James “Hoss” Cartwright, the former vice chairman of the Joint Chiefs of Staff, has received a target letter informing him that he’s under investigation for allegedly leaking information about a massive attack using a computer virus named Stuxnet on Iran’s nuclear facilities. Gen. Cartwright, 63, becomes the latest individual targeted over alleged leaks by the Obama administration, which has already prosecuted or charged eight individuals under the Espionage Act.

Last year, the New York Times reported that Cartwright, a four-star general who was vice chairman of the Joint Chiefs from 2007 to 2011, conceived and ran the cyber operation, called Olympic Games, under Presidents Bush and Obama. According to the front-page story by chief Washington correspondent David Sanger, President Obama ordered the cyber attacks sped up, and in 2010 an attack using the Stuxnet worm temporarily disabled 1,000 centrifuges that the Iranians were using to enrich uranium.The Times story included details of the Olympic Games operation, including the cooperation of Israeli intelligence and the way the virus was introduced to an Iranian nuclear facility. It described meetings in the White House Situation Room and was based on interviews with “current and former American, European and Israeli officials involved in the program.”

As soon as the Times report appeared, Congressional leaders demanded a criminal probe, and President Obama said he had “zero tolerance” for “these kinds of leaks.” Republicans charged that senior administration officials had leaked the details to bolster the president’s national security credentials during the 2012 campaign.

But, said legal sources, while the probe that Attorney General Eric Holder ordered initially focused on whether the information came from inside the White House, by late last year FBI agents were zeroing in on Cartwright, who had served as one of the president’s “inner circle” of national security advisors. Two sources said prosecutors were able to identify Cartwright as a suspected leaker without resorting to a secret subpoena of the phone records of New York Times reporters.

One source familiar with the probe said the Justice Department has not made a final decision on whether to charge Cartwright.

Cartwright, who retired from the military in August 2011, did not respond to repeated requests for comment. His attorney, former Obama White House counsel Greg Craig, said Thursday, “I have no comment.”

The Times, of course, has said that it will not be commenting on stories regarding who may or may not be its confidential sources, however its interesting to note that NBC is reporting this morning that Cartwright was identified as a target without the Justice Department having to access the phone records of any Times reporters. That, of course, raises the question of how Cartwright may have been identified and whether or not there might be more than one leaker involved in this story.  Whatever the story might be, though, it’s worth noting that Cartwright hasn’t even been charged with anything yet so it’s improper to jump to conclusions about his guilt or innocence. Nonetheless, it’s not every day that a former JCS Vice-Chairman is targeted in a leak investigation like this and one assumes that the Justice Department wouldn’t be taking this step if they didn’t have some fair degree of confidence in the evidence that they have come up with to date.