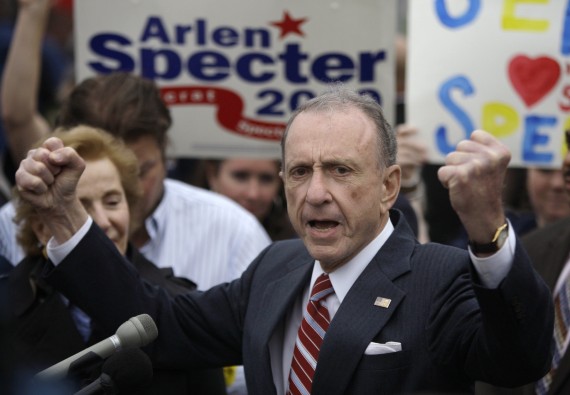 Arlen Specter, who served as a Senator from Pennsylvania for some thirty years and found himself in the middle of some of the most contentious political battles of the past thirty years or more, has died at the age of 82:

Former senator Arlen Specter of Pennsylvania, one of the nation’s most durable political figures, who during three decades in the Senate became known for his command of constitutional law, died of cancer Oct. 14 at his home in Philadelphia. He was 82.

His son Shanin Specter confirmed his death to the Associated Press.

Sen. Specter was long a voice of Republican moderation, but he handed Democrats a supermajority in the Senate by switching parties in 2009. He lost the Democratic primary the next year in an anti-incumbency movement that swept many veteran politicians from office. He had also exposed himself to charges of political opportunism by changing his party allegiance.

As a young Philadelphia prosecutor, he first gained national attention as assistant counsel to the Warren Commission, which investigated the 1963 assassination of President John F. Kennedy. He was the chief architect of the commission’s controversial “single-bullet theory,” which held that the same bullet that killed Kennedy also wounded then-Texas Gov. John Connally.

Sen. Specter parlayed the exposure he received on the commission into a political career, first as a combative and outspoken Philadelphia district attorney and then as a five-term U.S. senator.

Arriving on Capitol Hill in 1981, he became a dominant force during the Judiciary Committee’s rancorous Supreme Court nomination battles. More than anyone else, he helped defeat conservative nominee Robert Bork in 1987, and his aggressive questioning of law professor Anita Hill four years later — he accused her of “flat-out perjury” — helped secure Clarence Thomas’s confirmation.

Sen. Specter was respected for his well-prepared and persuasive arguments that were rooted in the law, with little regard for political expediency. He sided with liberals on some divisive issues and with conservatives on others, leaving him with little support on either ends of the spectrum.

He consistently drew challenges from the left and the right in his centrist state, and his career was marked by narrow victories. But Sen. Specter, never a natural politician, was savvy on the stump, somehow always finding a way to win.

“I had a rocky road getting here,” he once said, “and I’m going to do my damnedest to stay here.”

In 2009, Sen. Specter was one of three Republicans who negotiated with Senate Democrats over President Obama’s economic stimulus bill, but his vote for the $787 billion measure left him politically vulnerable among Pennsylvania’s unpredictable electorate.

“I believe that my duty is to follow my conscience and vote what I think is in the best interest of the country, and the political risks will have to abide,” Sen. Specter said at the time.

Acknowledging that he could not win his 2010 reelection battle against Republican primary challenger Patrick J. Toomey, the former head of the conservative Club for Growth, Sen. Specter switched parties. He became the 60th Democratic senator, giving Obama’s party a filibuster-proof majority. But he immediately drew a primary challenge from Rep. Joe Sestak, whose run from the left forced Sen. Specter to assert liberal positions on issues such as health-care reform.

Sen. Specter was the rare lawmaker who catered to the interests of his state while also playing a starring — and often controversial — role in fractious debates over important national issues.

“Arlen Specter may be the most masterful politician in the history of this state,” said G. Terry Madonna, a political scientist at Franklin and Marshall College in Lancaster, Pa. “He won’t be outworked, he won’t be out-hustled, and he understands his state better than any other politician in modern history.”

The longest-serving senator in Pennsylvania history, Sen. Specter aged dramatically while in public office, suffering serious health problems over the years. He survived bouts with benign brain tumors in 1993 and 1996, and then cancer in the form of Hodgkin’s disease in 2005 and 2008. Despite his medical issues, he never missed a Senate session, and he co-wrote a book on the subject in 2008 called “Never Give In: Battling Cancer in the Senate.”

When Sen. Specter arrived in the Senate, he found a home among moderate Republicans, often voting with Democrats. He supported the death penalty and opposed most gun-control measures, but favored affirmative action and voted against some tax cuts for wealthier Americans. He also was a leader in strengthening civil rights laws.

“He was a Rockefeller Republican, a liberal Republican, and was willing to take on Presidents Reagan and Bush, and became a true leader in the bipartisan efforts that strengthened all the civil rights laws and defeated Bork,” said Ralph G. Neas, a longtime civil rights and health-care advocate.

“Then you had a line of demarcation,” Neas said, beginning with Thomas’s Supreme Court nomination and continuing with the Republican majorities in the House and the Senate after the 1994 midterm elections. “Arlen Specter became an especially cautious politician,” Neas said.

When the Republicans took control of the Senate in 1995 with a new cast of conservatives, Sen. Specter was a leader of the moderate wing. He sought the party’s 1996 presidential nomination to challenge President Bill Clinton, arguing that the nation could not afford “a Republican candidate so captive to the demands of the intolerant right that we end up reelecting a president of the incompetent left.”

But he could not woo enough Republicans, and he suspended his campaign just before the primaries began, endorsing Sen. Robert J. Dole (Kan.).

In the years that followed, Sen. Specter’s breed of moderate Republicans vanished in Congress and he became a more cautious politician, but he gained considerable influence after becoming chairman of the Judiciary Committee in 2005.

After Sen. Specter warned President George W. Bush not to nominate judges who would overturn Roe v. Wade — the 1973 Supreme Court case that essentially legalized abortion rights — conservative Republicans protested his appointment to the Judiciary Committee. Sen. Specter later said he would not use a “litmus test” to deny confirmation to abortion opponents.

He presided over the confirmations of Supreme Court Justices John G. Roberts Jr. and Samuel A. Alito Jr. and was a key force behind passage of some of the Bush administration’s controversial anti-terrorism laws, including the Patriot Act. But as controversy erupted over the government’s handling of detainees at Guantanamo Bay, Cuba, Sen. Specter became a leading proponent of habeas corpus rights for unlawful combatants.

And in 2007, when Bush’s attorney general, Alberto Gonzales, was accused of having political motivations in the firings of eight U.S. attorneys, Sen. Specter concluded that the Justice Department would be better off if Gonzales resigned.

Specter also made a name for himself before becoming a Senator when, as a staffer for the Warren Commission during its investigation of the assassination of President Kennedy, he developed what came to be known as the “Single Bullet Theory,” or “Magic Bullet Theory” as critics called it, which was an attempt to explain how both Kennedy and Texas Governor John Connolly could have been struck by the same bullet. Perhaps his most controversial role, though, was when aggressively cross-examined Anita Hill during her testimony before the Judiciary Committee during the Clarence Thomas Confirmation Hearings. In his later years, of course, Specter became somewhat of an outcast in his own party to the point where he switched parties in an effort to avoid losing a Republican primary against Pat Toomey. In the end, Specter ended up losing the Democratic Primary in 2010 to Congressman Joe Sestak, who himself was defeated in the General Election by Pat Toomey. Specter was the longest serving Senator in Pennsylvania’s history at 30 years of service, a record that is unlikely to be matched any time soon.