The Fourth Circuit Court of Appeals has upheld Maryland's ban on certain so-called "assault weapons," but it's unclear if the Supreme Court will even take up the case. 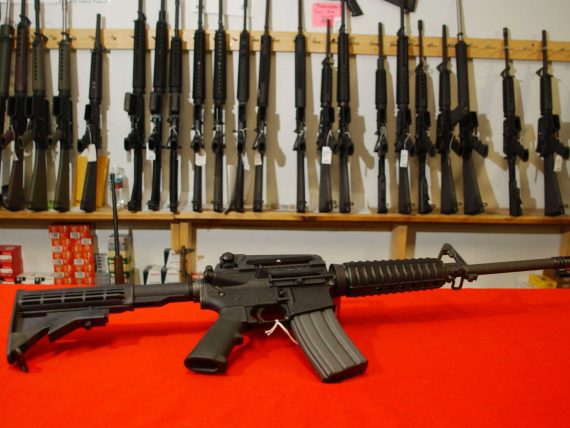 The Fourth Circuit Court of Appeals has upheld Maryland’s law banning certain so-called “assault weapons” in a decision likely revive the debate over gun control and the scope of the Supreme Court’s prior rulings on the issue:

A Federal appeals court upheld Maryland’s ban on assault rifles, concluding that the powerful military-style guns outlawed by the measure are not entitled to protection under the Second Amendment.

The 10-4 ruling, issued by the entire Fourth Circuit Court of Appeals in Richmond, reverses a decision by a smaller panel of judges from the court last year that called the law’s constitutionality into question.

The bill was steered through the Maryland Senate in 2013 by then-Sen. Brian E. Frosh in the wake of the deadly shooting at Sandy Hook Elementary School in Connecticut. Since elected as the state’s attorney general, he has defended the law in court.

Frosh, a Democrat, called the dual role gratifying and said he was very happy with the ruling.

“It’s a very strong opinion and we think absolutely correct,” said Frosh, who called the violence wrought by the now-banned guns “senseless.”

The law, which also outlawed magazines capable of holding more than 10 rounds, was challenged by two men who said they wanted to buy the banned rifles and by a handful of gun stores and associations. They argued that the rifles were popular among gun enthusiasts, used by people to defend their homes and not inherently dangerous. A federal judge in Baltimore disagreed, upholding the law.

A lawyer for the plaintiffs could not be reached for comment Tuesday.

The plaintiffs could appeal the case to the Supreme Court. Frosh said that he’s confident the law will stand should the high court weigh in.

The case is among several that have tested how courts would consider new firearm restrictions in the wake of a 2008 Supreme Court decision — District of Columbia v. Heller — that affirmed an individual’s constitutional right to own at least some types of guns.

In the Fourth Circuit’s decision, which began by recounting recent mass shootings, Judge Robert B. King concluded that the rifles banned by the Maryland law fell outside of the protections laid down by the Supreme Court.

“Both before and after Newtown, similar military-style rifles and detachable magazines have been used to perpetrate mass shootings in places whose names have become synonymous with the slaughters that occurred there,” he wrote.

“We are convinced that the banned assault weapons and large-capacity magazines are among those arms that are ‘like’ ‘M-16 rifles’ — ‘weapons that are most useful in military service’ — which the Heller Court singled out as being beyond the Second Amendment’s reach,” King wrote.

Four other courts have upheld similar restrictions in other states, he wrote, and he said the earlier decision by the panel of judges would have made the court an outlier.

In a scathing dissent, Judge William B. Traxler said it was his colleagues who had now gone too far by denying that the guns are covered under the Second Amendment at all.

“The majority has gone to greater lengths than any other court to eviscerate the constitutionally guaranteed right to keep and bear arms,” he wrote.

Even if the weapons were constitutionally protected, Traxler acknowledged it is possible that the Maryland law still might pass muster but said it should be subjected to a stricter review by the court.

This ruling by the full Fourth Circuit overturns a decision issued last year by a three-judge panel that found the law unconstitutional based on the Supreme Court’s rulings in D.C. v. Heller and McDonald v. Chicago. In both of those cases, though, the Court made clear that it scope of its ruling was limited to the facts of the cases in front of it, which in general involved sweeping municipal laws that made it essentially impossible for an ordinary citizen to own a handgun even in the privacy of their own home. In what was essentially the Court’s first real opinion examining the history and intent behind the Second Amendment, the Court in Heller found that, at the very least, it meant that citizens had a constitutional right to own and possess a gun for personal defense in the privacy of their homes. In McDonald, the Court expanded that ruling to the states via the Incorporation Doctrine, which has applied nearly all of the provisions of the Bill of Rights to the states via the 14th Amendment. In both rulings, though, the Court, in opinions written by Justices Scalia and Alito respectively, though, the Court made clear that the ruling did not preclude the possibility that other laws that fall under the rubric of “gun control” would withstand Constitutional muster. In the process, the Court set in motion a new series of cases in which lawsuits have been filed challenging state and local laws dealing with issues such as the right to carry a gun in public. So far, though, the Supreme Court has declined to get involved in another Second Amendment case since it issued the opinion in McDonald in 2010. In the past four years alone, the Court has declined review in cases challenging the laws regarding carrying guns in public in New York and New Jersey, a San Francisco law that required handguns to be kept locked up when not being used, a case out of Illinois regarding that state’s ban on so-called “assault weapons,” and a pair of lawsuits challenging laws passed by New York and Connecticut in the wake of the shooting at Sandy Hook Elementary School in 2012. With the exception of the final pair of cases, all of these decisions to decline review occurred when the Court had a full compliment of nine Justices, suggesting quite strongly that the Justices are not at all eager to revisit the Second Amendment unless and until it’s absolutely necessary. This suggests that the Court probably won’t take the appeal in this case unless there’s something unusual about the Fourth Circuit case that differentiates from the others, which doesn’t appear to be the case. Additionally, the fact that there is currently not a split among the Circuit Courts on this issue is yet another reason why the nation’s highest court probably won’t take up the appeal here.

As for the decision itself, the reaction has been about what you’d expect, with conservatives such as Charles C.W. Cooke and David French at National Review decrying the ruling and gun control advocates such as Slate’s Mark Joseph Stern generally praising the result. While both sides argue their cases quite well, it strikes me that the critics of the court’s ruling have the better case. In reality, the entire “assault weapons” debate is based on mistaken premises and the fact that many people who support a ban on so-called “assault weapons” don’t really understand what they’re talking about. For the most part, these weapons are no different from standard rifles that have been legal to sell in the United States for a long time, and which remain legal even after the passage of these bans. The main differences lie in the fact that the weapons that people consider to be “assault weapons,” such as the well-known AR-15, are designed to look similar to actual military weapons such as the M-16 and the AK-47. That design appearance, however, is where the similarity ends. Unlike the weapons the military uses, these “assault weapons” are not fully automatic and cannot be modified to have this function unless a gun owner has some rather specific knowledge and the tools to do the job. In the end, the objection to “assault weapons” boils down to little more than the fact that they look scary, which is hardly a legal basis to single them out for a ban. Additionally given the fact that the Court in Heller and McDonald made clear that the right to self-defense, and defense of home and property, was among the purposes behind the Second Amendment, it seems rather obvious that these bans are over-reaching and should not survive a proper analysis under the standards set in Heller and McDonald. As I note above, though, it’s entirely unclear when the Justices of the Supreme Court will see fit to chime in on this issue again.