A man with one of the more unique political and personal resumes in recent memory has passed away. 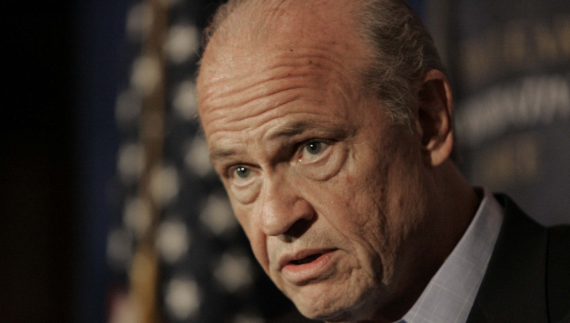 Fred Thompson, a man who had a long career as a lawyer, politician, and actor that took him from the Senate Watergate Committee, where his questioning of a White House aide led to the discovery of the recordings that brought down a Presidency, to Hollywood, to the United States Senate, and a Presidential Campaign that he never seemed to be very interested in, has died at 73 after a battle with cancer:

Fred D. Thompson, a former United States senator, actor and Republican presidential candidate, died on Sunday in Nashville. He was 73.

The cause was a recurrence of lymphoma, his family said in a statement.

Mr. Thompson had an unusual career, moving back and forth between national politics and mass-market entertainment. He left a regular role on the hit NBC drama “Law & Order” to run for president in 2008.

On television and on movie screens, Mr. Thompson was known for playing authoritative characters, but he was sometimes ambivalent in his political aspirations. While he brought gravitas to his on-screen characters, he often struggled on the campaign trail, especially during his unsuccessful run for the Republican presidential nomination in 2008.

Mr. Thompson compiled a solidly conservative voting record in the Senate, though aides said he showed little enthusiasm for divisive battles over abortion and other issues that motivated the religious right. In a 2007 interview, he told The New York Times that he had always felt that the Senate “was never meant to be the place where I would stay for my entire career.”

“You are either going to do the right thing, or you’re not,” he said. “If you are politically tacking all the time, it makes life too long and too complicated.”

Mr. Thompson, a lawyer, began his life in public service at the age of 30 with a lucky break when his mentor, Senator Howard H. Baker Jr., chose him over more experienced candidates to serve as Republican counsel on the Senate Watergate Committee.

His tough questioning of Alexander Butterfield, a former aide to President Richard M. Nixon, led to the revelation of recording devices in the Oval Office, a turning point in the investigation that ended in the president’s resignation. After the committee concluded its work, Mr. Thompson embarked on a lucrative legal and lobbying career.

He began acting when he was tapped to play himself in the 1985 movie “Marie.” The film, starring Sissy Spacek, was based on the life of Marie Ragghianti, the head of the Tennessee Board of Pardons and Paroles and a whistleblower, who revealed a clemency-selling scandal that brought down the Tennessee governor, Leonard Ray Blanton. Mr. Thompson had been Ms. Ragghianti’s lawyer.

By the time Mr. Baker talked him into running in a 1994 special election to fill the Senate seat from Tennessee vacated by Vice President Al Gore, Mr. Thompson had 18 movie credits, including “No Way Out,” “Days of Thunder” and “In the Line of Fire.”

On Election Day, he swept aside his Democratic opponent, Representative Jim Cooper, with 60 percent of the vote. In 1996, he just as easily won a full six-year term.

Mr. Gore issued a statement Sunday evening in which he praised Mr. Thompson for his dedication to public service.

“At a moment of history’s choosing, Fred’s extraordinary integrity while working with Senator Howard Baker on the Watergate Committee helped our nation find its way,” Mr. Gore said. “I was deeply inspired by his matter-of-fact, no-nonsense moral courage in that crucible. Tennessee and our nation owe a great debt to Fred Thompson.”

Mr. Thompson served eight years in the Senate before leaving his seat in 2002 for a role on “Law & Order.” He played Arthur Branch, a Manhattan district attorney.

Mr. Thompson believed his biggest role was yet to come, however, and in 2007 he asked the producers of “Law & Order” to release him from his contract so he could explore a bid for the Republican presidential nomination.

His supporters hoped that his on-screen charisma and small-town roots could make him into a modern-day Ronald Reagan, another conservative actor turned politician, but it was not to be. Mr. Thompson’s campaign was often languid and failed to attract significant support in the primaries, and he withdrew from the race in January 2008.

Mr. Thompson was born on Aug. 19, 1942, in Sheffield, Ala., and grew up in the small town of Lawrenceburg, Tenn., where he was a top athlete and his father sold used cars.

He was 17 when he married Sarah Elizabeth Lindsey in September 1959. They each worked to pay for his education — Mr. Thompson graduated in 1964 from Memphis State University (now the University of Memphis) and received a law degree from Vanderbilt University in 1967 — and to raise three children. After finishing law school, he joined the law firm of his wife’s uncle and in 1969 was appointed an assistant United States attorney in Nashville.

The couple divorced in 1985. A daughter from that marriage, Elizabeth (Betsy) Thompson Panici, died from an accidental overdose of prescription drugs in 2002.

In 2002, Mr. Thompson married Jeri Kehn, a Republican consultant, and they had two children.

And from The Washington Post, a reminder of Thompson’s historically critical role in the Watergate hearings:

Fred Thompson, the former U.S. senator from Tennessee and acclaimed film and television actor who first gained national prominence as a lawyer on the Senate committee that investigated Watergate, died Nov. 1 in Nashville. He was 73.

A family statement said he died after a recurrence of lymphoma.

In a multifaceted career, Mr. Thompson represented his state in the U.S. Senate from 1994 to 2003. He was also a lobbyist, radio host and columnist. Among other acting roles, he starred as a district attorney on the hit television series “Law & Order.”

More than many of his contemporaries, Mr. Thompson, a product of a small-town upbringing, demonstrated the possibilities inherent in American life, in the courtroom and the hearing room, in the halls of Congress and on the sound stages of the entertainment world.

A physically imposing man who stood 6-foot-5 and deployed a deep, syrupy voice, he was known as folksy but hardworking, and both amiable and ambitious during a career in which he prosecuted criminals in real life as well as on TV, played presidents on screen and sought the Republican presidential nomination in actuality.
But in a life of many phases, he first came to the attention of the American public in 1973 as one of the principal supporting players in one of the country’s most celebrated political dramas, the Watergate hearings.

These held the nation spellbound through hot summer days, with a roster of engrossing characters and an almost-daily menu of startling plot twists. Of all that occurred at the hearings, one of the most breathtaking incidents was the revelation that White House conversations had been surreptitiously recorded.

It was during the questioning by Mr. Thompson of White House aide Alexander Butterfield that the public first learned of the taped conversations, with their potential to become incriminating evidence.

“Mr. Butterfield,” Mr. Thompson began, “Are you aware of the installation of any listening devices in the Oval Office of the president?”

Moments of silence followed as the country, tuned in on television, hung on Butterfield’s response. It was in the affirmative.

Historians and scholars have probed into the story of how Mr. Thompson’s question came to be asked, what lay behind it and who played the most significant role in unearthing the existence of the tapes. It was clear that Mr. Thompson was asking a question to which he already knew the answer.

Nevertheless, it was his questioning and the response it drew that have been recognized as a turning point in history. After the existence of the tapes became known, President Richard M. Nixon’s ultimate resignation was regarded as inevitable.

Viewers of the hearings saw Mr. Thompson at the side of the senior Republican member of the Watergate committee, Sen. Howard Baker (Tenn.). Thompson was Baker’s chief counsel. Baker became known for encapsulating the hearings in the question “What did the president know, and when did he know it?”

To a large degree, Thompson’s role in the Watergate hearings, which Michael Kranish writes about in a piece at The Boston Globe, was due to the direction of his mentor, and the chief Republican on the Senate Committee, Tennessee Senator Howard Baker.  Nonetheless, it’s worth remembering that it was Thompson’s questioning of Fox Butterfield, which had obviously come after endless hours of research and depositions beforehand, regarding a recording system in the White House that led to the chain of events that led Baker himself to ask his legendary question, a question that ultimately led to the downfall of a Presidency. At the time he was named a Minority Counsel for the Committee, there were many who assumed that Thompson would end up being an apologist for the Nixon Administration but, much like Baker, he ultimately became more interested in seeking the truth than partisanship, and the nation ought to thank him for that.

Outside of politics, of course, many people will remember Thompson for his career as an actor that fell between his time as a Washington lawyer an his Senate career. Perhaps his most memorable performance was as Rear Admiral Joshua Painter in The Hunt For Red October, as well as other roles in movies such as Cape Fear and In The Line Of Fire. Perhaps most notable, though, were the five seasons he spent as District Attorney Arthur Branch on Law & Order, along with several appearances in that role in its various spin-off series during his time on the show. On more than one occasion, the writers on the show played off of Thompon’s own political leanings to frame political debates about many of the show’s plots ranging from the death penalty and the ethics of plea bargaining to gay rights.

For a time, it seemed like Thompson had found an acting role that he was comfortable with and would stay with for a long time, but then he was persuaded to run for President in 2008 at a time when the Republican Party was in the doldrums thanks to the failures of the Bush Administration, a faltering economy, and a stable of candidates that was entirely uninspiring. On paper at least, Thompson was a promising candidate. He offered a record of fiscal conservatism combined with some degree of social liberalism that could appeal to more than just one block of the Republican Party. During his Presidential campaign, for example, Thompson took a decidedly different position on the Terri Schiavo case than many of his fellow party members, in no small part because of the experience he had involving one of his own children. In the end, though, Thompson’s Presidential campaign looked much better on paper than it was in reality, in no small part because Thompson himself never really seemed to be as interested in running for President as the people who had encouraged him to do so were. The campaign didn’t last very long, and afterwards Thompson returned to some acting roles but also suffered through the battle with lymphoma that ultimately took his life.  Whatever one might think about his political positions, he certainly lived one of the more well-rounded lives of any recent political figure.